New Release Spotlight: THE BRAVE AND THE BOLD

The Hidden Truth had Ken Holder at L. Neil Smith’s The Libertarian Enterprise calling it “… the best science fiction techno-thriller since whatever Neil Stephenson’s last book was.” Book #2, A Rambling Wreck, was a finalist for the Conservative Libertarian Fiction Alliance 2018 Book of the Year. Now Book 3 of the Hidden Truth, The Brave and the Bold, is available… 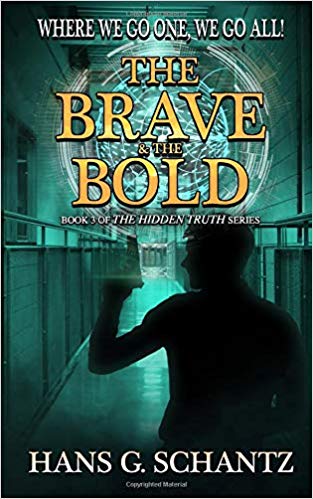 Where we go one, we go all!

When the Civic Circle tries to embroil the U.S. in a senseless war, Pete must leverage his summer intern position to infiltrate their Social Justice Leadership Forum on Jekyll Island, and disrupt their plans.

The danger – and the opportunity – are far greater than he imagines. The sinister power behind the Cabal – a power that aims to reshape society, destroy our civilization, and cast humanity into bondage – tolerates no rivals. Deep within the conspiracy’s stronghold Pete discovers not only the secrets by which they retain their power, but also a crucial vulnerability that could cripple the Cabal with one decisive blow.

With his plans in jeopardy and his life at risk, Pete must forge an unlikely alliance of rivals, turn the Civic Circle against itself, expose their secrets, and end their threat once and for all.

Will fortune favor the brave and the bold?

Praise for The Brave and the Bold

“The Brave and the Bold is the most intricately crafted conspiracy story I’ve read since Illuminatus, and it’s entirely grounded in real events or plausible ones in its alternative universe, as opposed to Robert Anton Wilson’s zany tale.”
– John Walker, Co-founder of Autodesk, Inc., author of The Hacker’s Diet, operator of Fourmilab.ch and Ratburger.org

“Reads like the best of Michael Crichton’s or Neal Stephenson’s sci-fi thrillers. I couldn’t put it down.”
–Russell Newquist, author of the supernatural thriller War Demons

“Schantz cranks up the tension in an alt-history thriller that masterfully blends high science and conspiracy theory.”
– Daniel Humphreys, Dragon-nominated author of the Z-Day series of post-apocalyptic sci-fi thrillers and the Paxton Locke urban fantasy series.