Order of the Stick Rocks the Fantasy Genre! 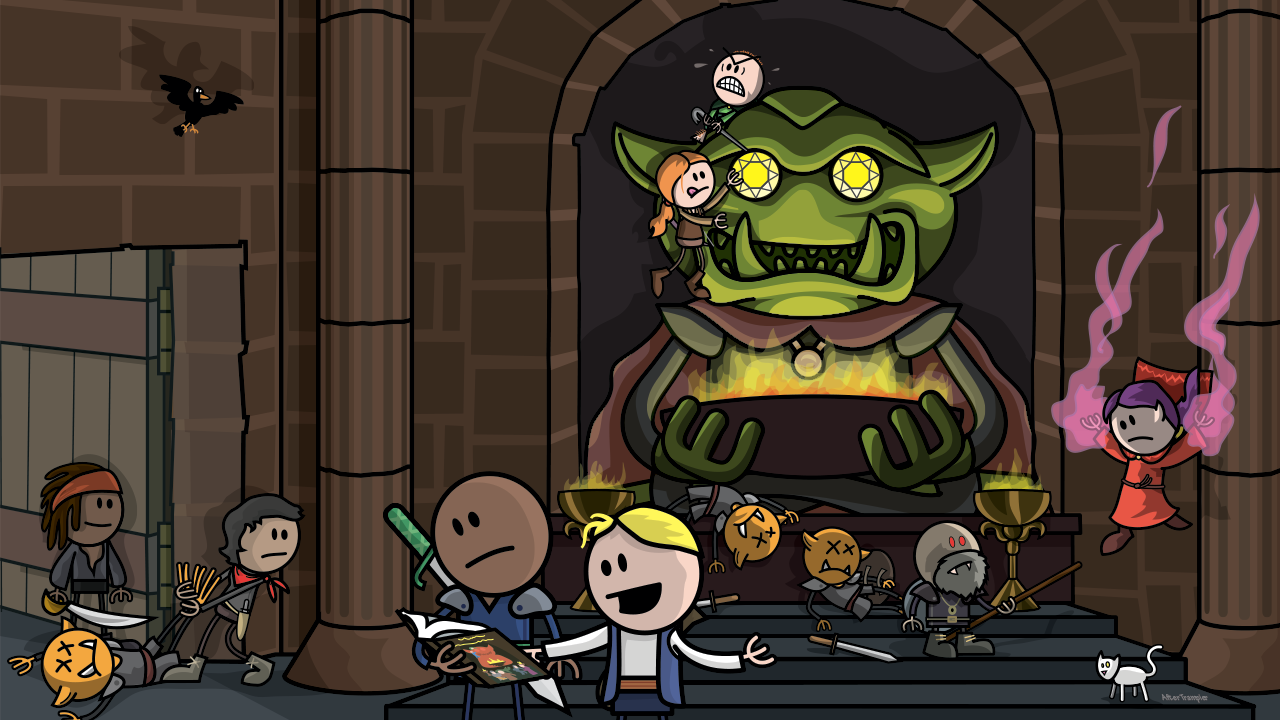 The Order of the Stick is one of those things that should never have worked. A comedic strip, illustrated entirely in stick figures, set in a literal D&D campaign world (complete with earning XP and other RPG tropes), with a dense, multi-layered plot, produced over the span of fifteen years, and still not done?

Absolutely should suck. But it doesn’t.

First, the art isn’t crappy. (Not that it ever was.) Sure, stick figures lack the complexity of, say, one of your typical comic books, but so what? The simplicity and clarity of the art is impressive in and of itself, and it effectively conveys, scene, action, and characterization. Not everything has to be a Joe Quesada masterpiece to be great.

Also, the strip was funny at the beginning, and has stayed funny for fifteen years. It’s not quite gag-a-strip, but it’s 99.9% of the way there, something incredibly difficult to attain. Humor is hard to do, harder than drama, and most humorous strips, shows, and series are forced to, sooner or later, drop back into drama because the writer ran out of the funny. Well, OOTS has brought the funny for a decade and a half, and hasn’t run out of juice yet. 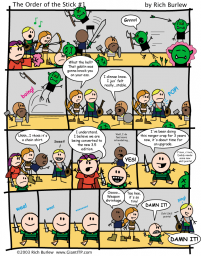 The first strip. (Click to… what, you need another reminder?)

Last is the genuine emotion in the series. Roy’s struggle to prove himself to a distant and disdainful father, while completing a truly epic quest to destroy the lich Xykon, the valor of Lord Hinjo (paladin of the Sapphire Guard) and the self-righteousness and consequent blindness of his fellow paladin (and stone cold bitch) Miko Miyazaki, or Vaarsuvius’ guilt over having sold his soul for a chance to get revenge on one dragon by killing roughly a fourth of all black dragons in existence (plus related half-dragons, dragon-blooded, dragon born)—with one spell: Familicide. (It’s an Epic. Kills you, and everybody related to you, or related to them, or them, or them, etc.)

The characterization is strong, varied, and consistent. No one acts out of character just to make a joke, and each main character, and many secondary characters, are given notable amounts of character development, and even full character arcs (like the orc ninja. Tragedy in one act.) In a culture that has apparently forgotten what storytelling is, Rich Burlew (creator of the strip) still knows what audiences want, and can deliver it.

Unfortunately, Rich suffered a severe hand injury back in 2012, which has crippled his ability to deliver strips on his formerly robust schedule. The story is still moving along, however, and Roy, et. al., are nearing the end of their quest. The stakes are literally world-ending—the most recent plotline has three entire pantheons voting on whether to destroy the world or not—and Team Evil is apparently ahead, in the ninth inning, with Team Stick desperately trying to tie up the game to force it into overtime.

It’s been a great ride so far. Well worth the length of the trip.