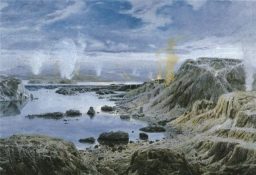 For these particular suspects, their case history spans almost the entire record of life on Earth.

The Spring of Life

Like a camera lens, the further we try to look back in time the fainter the picture becomes, a hazy, distant mountain. As we turn closer to our time, the story comes into better focus. The camera we have to use is the record in the stone. The lower the layer sits, the older it should be.

None of the ancient dates are reliable; they all rely on untestable hypotheses- assumptions outside the purview of our science. No one can know if radioactive decay rates have been steady for billions of years past, or even if the Earth’s history stretches back many billions of years. There is plenty of evidence that the decay rates aren’t even steady today. No one has a calibrated “molecular clock” that can date genetic changes far into the past. No one was watching when the sedimentary rocks were laid down, tracking the actual rates of sedimentation, or even seeing quite how they were laid down. For present purposes these dating details are not important. For ease of reference, I’ll hew to the various published, though often in dispute, timelines as closely as possible. It is the sequence, the order of events, which matters, not the precise dating of each development. These developments follow in a logical order, the order found in the layers of rock, one more or less on top of the next, that seal the fossil remains. One thing led to the next, the next could not have happened otherwise, and some of it was written in stone, in a broken and cryptic language we have partially learned to read.

Four billion peer-reviewed years ago, the stone tells us that Earth’s primordial atmosphere was made up mostly of nitrogen, carbon dioxide, and a few other gasses. There was no oxygen in the air, no life in the water, and the land was as desolate as the surface of Mars. Sometime after that life came in to being in the water, somehow. We do not know how or why this happened, nor have we been able to reproduce it in the lab. That mystery remains beyond the limits of our scientific knowledge, but, fortunately enough, won’t spoil this tale.

These first carbon-based life forms were simple by the standards of today, single-celled, tiny bags of complex chemicals. They were like microscopic “plants” of sorts, lifeforms that could make more like themselves from the
energy and chemicals in the world around them. Some of them became able to use the power of the Sun for
their energy and got their carbon from carbon dioxide dissolved in the water. This was the first Invention of photosynthesis, though it did not involve oxygen in any way. They were anaerobic organisms using other chemicals, perhaps dissolved iron and hydrogen sulphide.

Three more complicated forms of life were Invented along the way, and who knows what happened when? One was the cell with a nucleus, which serves as an inner motte to keep and protect the DNA from invaders. Another was the rise of the multiple-cell form, a story easy enough to tell by imagining a division of a cell into two, which then stayed with each other, as embryonic cells do. The third kind is recognized as a type of invasion. One kind of cell entered into another of a different kind, whether by invitation or not, there to take up residence in a symbiotic relationship. The photosynthetic chloroplasts and the animal mitochondria share this story, as the invaders that settled in. All higher forms of life- including Dear Reader- are composites, chimeras, mosaics, of all three of these processes.

Sometime after the Invention of anaerobic photosynthesis a new kind of photosynthesis appeared, again we know not how. These new microscopic creatures also used the power of the Sun and took in carbon dioxide, but they gave off highly-reactive, toxic oxygen in their waste. Over the next billion or two years, the two types of primitive “animal-plant” life forms (no one is really sure what to call them) were in a struggle to the death. Each was the poison of the other. This may have been the first existential war on Earth, a war which only one of them could win.

The microscopic anaerobic armies had already occupied all of the contested territory, the waters of the world. They had that advantage. But the younger organisms had a terrific weapon in the oxygen they gave off. Some of that went into the air and slowly oxidized the rocks on the land. It burned down the iron in the seawater too, oxidizing it. The rusted iron fell to the bottom of the sea, there to become our iron ore deposits. This was a long slow process until finally a tipping point was reached perhaps 850 million years ago, when the oxygen level rose to  something like what it is today. The old anaerobic forms retreated to a few tiny strongholds and green, oxygenic photosynthesis became the way of life from then on. In this longest global battle, Life had remodeled the air and the water of an entire planet, but there was an accumulating cost, a debit on account, to be paid for dearly come the future.

To be continued, come the future…