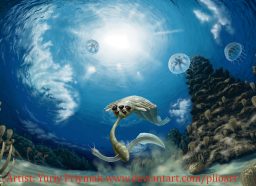 [Part 1]   In this longest global battle… an accumulating cost, a debit on account, to be paid for dearly come the future.

The Summer of Life

The Cambrian Explosion took place in two epic stages. After a chilly pre-Cambrian prelude, all kinds of new animals came into being to spread over the floor of the shallow sea, growing out of it, crawling across it, and burrowing into the sediment. Most of these models were entirely new- new body plans, new features like eyes and legs, new arrangements of parts. Then, after a long delay, more new kinds of life were invented that could float and swim, ascending into the waters above like the second stage of a rocket.

The trilobites are the most famous of these Cambrian critters. Darwin called their sudden appearance with no ancestors “undoubtedly of the most serious nature” for the survival and fitness of his story. Since his time all sorts of other exotic Cambrian do-dads, some with fundamental design ideas, have been discovered: none of them have known ancestors either. Most of these fundamental types have disappeared without further trace, never to reappear, a lost mystery of un-convergent evolution. Some of them appear to have been be bolted up together out of various other animal parts, a motif you may have encountered before. If you are looking for design ideas for highly-advanced aliens and their spaceships, the Cambrian is your go-to.

We’ve seen two of the several kinds of Creation of new life forms. For Invention of the First Kind, the new organisms appear in the fossil record as if from out of nowhere. Science may be able to explain how that works and reproduce it in the lab someday; today is not that day. In Invention of the Second Kind, two existing parent organisms create a child organism, as in the story about the mitochondrial invaders. It turns out that the mitochondria themselves are also bolted up in a mix & match fashion from a variety of uncommon ancestors.

This second process is recognized in many ways in addition to sexual reproduction- hybridization, horizontal gene transfer, symbiosis, metamorphosis, and so on. Genetic engineering is an artificial form of the second kind. Neither of these two kinds of invention are remotely Darwinian- there is no identifiable common ancestor; the new organism arises immediately. The creation of a new lifeform by the joining together of two older forms in one step is Darwin’s Tree of Life turned exactly upside down. It is the opposite of descent from a common ancestor by gradual modification. In the far distant future, a page or two from now, we will encounter an Invention of the Third Kind, as mysterious as the first, as if plucked from ideas in the air.

The records and the stories are obscure here as to how and when the next epic expansion happened. In one story, an algae teamed up with a fungus, got up out of the water and called itself lichen, a land plant. These and other kinds of composite plant-things first stormed the beaches, then pushed forward and ascended into the interior, breathing in carbon, exhaling oxygen. These original land plants were only a few centimeters tall at best, spreading out all across the surfaces of the continents. Then new kinds of plants rose above the old ones as little stems. The stems didn’t have much area to gather sunlight and CO2, so a leaf came along. The stems with their leaves could now make the ascent into the space above as before, calling themselves ferns and trees, creating whole forests. The forests spread out to cover all of the continents, even Antarctica. There were new kinds of animals that could eat these new kinds of plants.

The first microscopic lifeforms left us their messages in ancient rock like mudstones, shales, and limestones, written in letters so tiny they cannot be seen by the unaided eye. Later on many fossils became large enough to see, then large enough to require trucks to haul their bones to the museum. The largest fossils of them all are those stones they left behind, not too tiny to see but too big to see. Some of these fossils are limestone reefs so gigantic they’ve become member states in the UN, like Tuvalu and Bermuda. Other marine fossils were given names like the Cliffs of Dover, or the Alps. The forests that once covered the continents have new names too, like Powder River Basin and Coal Measures Group. These are the fossils that tell us just how massive life used to be. By comparison, our world is a battered remnant of what once was.

In the warm and glorious salad days of the Summer of Life the Earth was alive all across the continents and from pole to pole. In a lighter gravity, giant dinosaurs arrived and giant dinosaurs departed. Some were so tall they could eat the giant leaves from the tops of the giant trees. Giant flying things flew through the air; giant swimming things swum through the sea. Some days were warmer, others were cooler, some more humid, others more arid, but seldom was there ice at the poles. Mountains raised up and mountains worn down; the continents split apart; the oceans opened up, rising onto the land only to fall back to the shelves; volcanoes erupted then were stilled. Flowers were invented towards the end of the dinosaur’s reign, then grass, that uncanny, flowering plant.

In all the ages before there had been no grass.

Back in a bit. Gotta go mow the lawn…