“If you don’t believe in your own vision, who else is supposed to?” 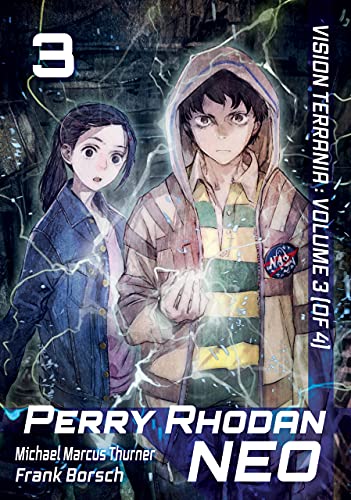 Days after Perry Rhodan invited the world to join him in the new city of Terrania, the Chinese siege intensifies, even scoring a success by shooting down Rhodan’s only spaceship, the Stardust. In an attempt to get around the Arkonide shields, General Bai Jun cuts off humanitarian aide to refugees flocking to Terrania. But the Chinese government has other ideas, and smuggles nuclear weapons into the Gobi Desert.

Meanwhile in Ireland, the mutant Sid Gonzalez is unconscious, trapped by his fears in visions of the past. John Marshall and Sue Mirafiore, with the help of other mutants such as series favorite Ras Tschubai, must dive into the young man’s mind to save him. But what they find in Sid’s past may be the key to understanding the man who now holds the Arkonide Crest da Zolral prisoner. The man who now knows why the Arkonides visited the Solar System.

The revisioned adventures of science fiction’s longest running hero, Perry Rhodan, continue in Perry Rhodan NEO #3 with School for Mutants by Michael Marcus Thurner and The Dark Twins by series veteran Frank Borsch. And while both novels push Perry Rhodan forward towards inevitable conflicts between his Terrania, China, and the United States deep state, the heart of each is the creation of two rival schools for mutants. One, by Homeland Security agent Clifford Monterny, who seeks to develop mutants into a sort of Hitlerjugend for Homeland Security, and the other, by wealthy billionaire Homer Adams, who seeks to marry the emerging potential of humanity to Perry Rhodan’s vision of the stars. And Sid Gonzalez, once a street urchin in Nicaragua, has at various times been in the care of both.

Flashbacks from Sid and the anti-Xavier Monterny flesh out the motives, formation, and atrocities behind the blackest of black Homeland Security projects. As a result, both men receive more characterization than Perry Rhodan himself. This does weaken the fire behind Rhodan’s vision, especially when realpolitik, ideology, and nationalism are so thoroughly condemned. And while the stars might be reason enough for people to unite under one banner, someone still has to sell that idea to people. Oddly, it is Sid’s zeal that does more for that than Rhodan’s actions. It is also as a shame, as Sid and Monterny’s flashbacks, with all the pain and grief involved, catch the reader’s attention more than the stalemate in China.

Thurner explores Sid’s trauma as the boy lives a life that’s a mix of Locke Lamora, Harry Potter, and The Promised Neverland, one that is as eventful and adventure filled as any child hero’s. Borsch tackles the harder job. European science fiction, such as Valerian and Laureline, is fond of avoiding simplistic portrayals of good and evil, and instead resorts to more a clash of differing factions. Borsch gives virtue and vice to Monterny’s creation of Homeland Security’s school for mutants, making the man’s misguided quest somewhat sympathetic. The old saw of a villain being the hero of his own story is true here. Unfortunately, the major motivator so far for all characters is pain. Not virtue, ideology, philosophy, just pain. And that fixation wears on the reader.

Allusions to The X-Men are unavoidable, although Perry Rhodan’s mutants were arguably introduced before Marvel’s heroes. Rhodan’s mutants are developments of the Campbelline fascination with psionics, and carry a high metabolic price. Sid once was a chubby teenager, for instance, before constant use of his powers turned him thin and sinewy. Other mutants are left exhausted by the use of their powers. And the refrain of ordinary people with extraordinary gifts resounds throughout both novels, as old favorites, both allies and enemies, surround Sid. At the same time, it is hard to avoid resonances with Professor Xavier and his students. Adams and Marshall combined fill a similar role to a team with analogues to Nightcrawler, Jean Grey, and others.

Perry Rhodan NEO is transitioning in these stories from Ringoesque worldbuilding to full-blown adventure. Some of this is due to consolidating a full year of the initial run into eight books. Some is also due to the initial setting mattering less, which couldn’t happen soon enough. 2036 looks different in these post-Corona, post-ISIS days as it did back when the European Union still mistook influence for power. But once we get to races against nuclear timers, psionic fights, and the chess match between generals, the story picks up, not just in pace, but enthusiasm. And the child protagonists of Sid and Sue provide that enthusiasm and zeal when cooler heads may dither.

As long as Perry Rhodan NEO concentrates on the stars, it soars. When the series focuses on the Earth, it stumbles. However, as long as Monterny holds Crest captive, Perry’s attentions will remain Earthbound. Fortunately, Crest is not the only Arkonide remaining, and Thora still has her part to play. Perry Rhodan will not remain shackled to mere worldly concerns for long.