Planetary: A Superhero Comic That Hates Heroes. And Heroism. And Also Probably You. 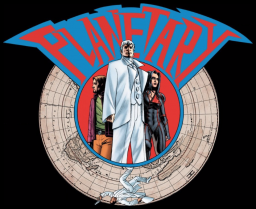 “Three people who walk the world in search of strangeness and wonder. They are the mystery archaeologists, explorers of the planet’s secret history, charting the unseen borders of a fantastic world.”

I cannot tell you how much I love the concept of Planetary (a comic series by Warren Ellis): All the pulp heroes, all the comic heroes, and much else besides, all exist in the same world. The Shadow (or an expy, that is, a clone), Sherlock Holmes, Fantastic Four expys, and on and on. Plus kaiju, giant ants in the Southwest, Count Dracula, and a From Earth to the Moon space launch (in 1851).

In the first issue, the three members of Planetary (see image) discover a quantum computer built during the waning days of WWII by a secret society of pulp heroes, expys of Doc Savage, Tarzan, The Shadow, Fu Manchu, Tom Swift, The Spider, G-8, and Operator 5. In the second issue, they find the Lost Island Of Monsters (aka “Island Zero”), where creatures akin to Gamera, Mothra, and Godzilla once lived. In the third issue, they investigate a Hong Kong legend about a murdered cop who’s come back from the grave to wreak vengeance on the criminal underworld, and find out it’s true. And the craziness only ramps up from there.

Here’s a random quote from the comic:

“I remember gunning down the deployment eggs of alien organic war-automata in Judgement, Rhode Island in January of 1931.”

If beautiful stories are a stream, deconstructionists are the assholes pouring sewage into the stream, fouling the water for every one else for no reason other than Satanic glee at ruining something good and beautiful. And Planetary could have been something good and beautiful. Each chapter sings with concepts and ideas that could make it marvelous. Based on its concept alone, the series should have been a rapturous foray into wonder and delight. Instead, nearly every page is brutal and ugly, because Ellis is a deconstructionist.

Ellis is clearly an immensely imaginative and creative person, and a skilled writer. Unfortunately, all that talent is harnessed to a mind bereft of Christian virtue or morality, one steeped in Leftism and moral relativism. Ellis’ work revels in brutality and blood, and relishes casual and gruesome deaths, presenting each in gory detail. Not a single spaceship from another world can crash land on Earth, save it crushes an infant beneath it (Ellis cheerfully showing us the toddler’s lifeless hand poking out from beneath the wreckage, blood streaming across his bedroom floor).

Issue 7—”To Be in England, in the Summertime”—features a Superman-esque hero, one who’s been degraded and abused by a John Constantine expy (“Jack Carter”). This Superman isn’t a noble being from Krypton, but an unknowing clone of Nazi Aryan super-athletes and Adolf Hitler’s “personal sex midgets”. Despite that, he was once a great and noble man. Then, in a fit of pique, Carter ensorcels him, placing him in a compromising position with “Thai rent-boys”, then takes photos of the noble hero, destroying his life. When the once-noble superhero snaps, descending to murder to get vengeance on the English magician, Carter sets a trap and bloodily murders him instead. (Viscera spraying across the page, of course, because Warren Ellis.) It’s deeply nasty stuff.

Ellis seeks to degrade and debase all that is good or noble, making the implicit argument that there is no morality save for what we choose, no justice save for that we impose via our wills and personal power. Planetary is a deconstruction and repudiation of heroes. It’s anti-heroes and anti-heroism.

The series closes with what would, in other circumstances, be a simple story about a noble pursuit: rescuing a member of the team, long thought lost, from imprisonment in a pocket of space where time no longer passes. And, indeed, the series sort of ends on kind of a nearly hopeful ending.

But that’s exactly the problem with the series: a ton of good stuff interspersed with more than enough absolutely vile stuff to poison the whole thing. The tiny moment of nobility is just a garnish on the fetid stew of nihilism and brutality. It’s TRAGIC.

I love the thought of a world where an aging Tom Swift (or expy of same) can have lunch with Tony Stark, trading tips on maximizing the thrust on Stark’s battlesuit, while across town Doc Savage watches his grandkid playing dodgeball with Franklin Richards, while he and Reed Richards debate the multiple worlds theory with Ray Palmer. Meanwhile, on the other side of the planet, the X-Men and the Justice League are teaming up to battle a kaiju summoned by Fu Manchu’s daughter.

It’s a damn tragedy that the mind which actually created such a world was so dark and twisted that he ruined it, squandering its potential. In an ironic way, the corrupt “First Four” (the Fantastic Four under different names and slightly different powers) mirror Ellis himself: genius which, in another world, could have been benevolent and admirable, twisted to the service of darkness.