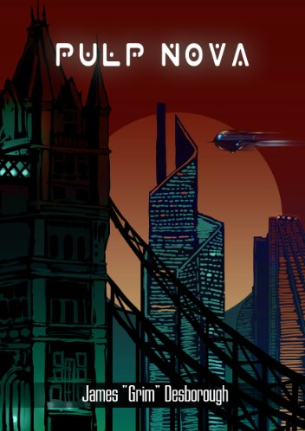 Ace Slamm: Space Bastard – Turn on a Dame will be the last story this reviewer reads from Pulp Nova. It’s clear after this third strike that James Desborough’s work is mired in fashionably modern nihilism and deconstructivism rather than a forward looking attempt to recapture the magic of the pulp era.  The grim and bleak cynicism that permeates this book provides an excellent atmosphere for the cosmic horror of Weird Tales style pulps, but undercuts stories written in any other genre of the pulps. Turn on a Dame presents a bitter drunk of a pilot, the eponymous Ace Slamm, as the protagonist, but at its heart it’s really about how Flash Gordon, Dale Arden, and the Professor were the secret bad guys who done Ming the Merciless wrong.   This is an odd choice of direction, but Desborough is hardly the first to adopt an attitude of, “I had to burn it to the ground, sell its children into slavery, and then salt the ground on which it lay, and now hereby declare this barren wasteland the new and improved pulp.”

Consider the lead character, Ace Slamm, the Space Bastard. Lightly mocked in a bar by a few German pilots over the English pilots’ cowardice during a battle against the alien empire Dyzan, Ace responds in a manner specifically calculated to shock the reader and demonstrate the accuracy of the appellation, “Space Bastard”.  He doesn’t just beat the Germans in a fight, he cruelly and maliciously sucker punches their leader by smashing him with a beer mug and grinding the shards into the man’s teeth, then kicks the man in the crotch when he is down.  Later, he gleefully rips the shirt and bra off of Gail, the scientist’s daughter.  A few paragraphs later, Ace casually and needlessly breaks his ex-wife’s nose…

On the flip side, we are constantly reminded that Gail’s boyfriend, the blonde athlete Flash Gordon – er, I mean, Bang Donnybrook, is an honorable man. Desborough ham-fistedly assures the reader that Bang is a complete doofus, and his nobility is a mask he wears to hide his stupidity and general incompetence.

This is the man whose death we’re supposed to celebrate at the story’s end.

You see, the truth of the war with Dyzan, we are reliably informed by the former Dyzanian Emperor himself, is that Bang, Gail, and the Professor discovered Dyzan, and immediately fomented rebellion within the peace-loving Empire, and sparked the Dyzanian invasion of Earth.  The big reveal is that the three hired Ace to help them establish proof that they discovered Dyzan, fomented rebellion within the Empire, and caused the Dyzanian invasion of Earth.  Ace and the Emperor agree that the truth is not something to aspire to, and so Ace leaves the trio in the hands of the Emperor who shoots them out of hand.

Get it? Flash Gordon, Dale, and the Professor were secretly the bad guys the whole time!  Just in case you hadn’t figured it out yet.

This kind of pseudo-intellectual posturing has got to die, and not out of some misplaced loyalty to the past, but as an objective means of improving modern story telling. The insipid notion that inverting clear-cut moral tales to present the honest and upright heroes as objects of scorn simply Does Not Work.  It’s lazy, it’s stupid, and it is insulting.

Forget the ephemeral philosophical notions for a moment, and just consider the message presented in the final scene of Turn on a Dame.  Truth is dumb.  People are better off being fed comfortable lies than awkward truths. People who love truth and search for truth are worthy of scorn at least, and probably a bullet in the head if you can get away with it.  This notion is simply not one that resonates with any reader with a modicum of intellect or common decency – rather than resonate, it screeches through the reader’s mind like nails on a chalkboard.

He might be one hell of a renegade RPG designer, but James Desborough’s fiction embraces the modern zeitgeist. It is nothing new.  If you want to see how a skilled writer presents an anti-hero for which the reader can maintain some sympathy, read Robert Kroese’s Starship Grifters series.  If you want to see how to present doomed heroes read Schuyler Hernstrom’s Thune’s Vision. Hernstrom understands the point of fallen heroes is to serve as a cautionary tale – don’t be that guy – and does it in a way that the reader laments the fallen hero’s poor decisions because even in the falling, we still feel some empathy for them.

We get none of that in Pulp Nova. We get a protagonist we hate doing things we despise.  This book is exactly the sort of fiction that I point to when I observe that when you hear a writer say, “I like the pulps, but…” what follows is always a variation on, “I really want to kill it and dance around in a dress made of its skin.”  Desborough’s attempts at pulp increasingly read like Lenny’s attempts at loving rabbits: 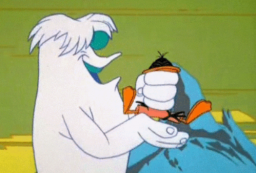 How people love them and squeeze them and hug them and pet them and call them Pulps.

Pulp Nova is not pulp, it is anti-pulp.

It is pure, unalloyed, modern nihilistic fiction that rejects the goodness and decency that saturates the original pulps as a direct outgrowth of the time in which the original pulps were written. The stories of the pulp era are a natural expression of a high trust society predicated on since discarded notions of fiction as a means to educate, inspire, and uplift.  The stories of Pulp Nova are a natural expression of a low trust society predicated on notions of fiction as a means to deceive, demotivate, and hold down.  Rather than aspire to stories that encourage the reader to rebel against misery and evil, these stories encourage the reader to embrace deceit and filth, and they do it in the most clumsy and blatantly dishonest way possible.

When I started this series of reviews, I pointed out that Desborough was ahead of the curve when he published this pulp-inspired book more than four years ago. He saw the thirst for pulp stories early, but failed to understand the core reason for that thirst.  People don’t just want stories absent distracting literary tricks, they want heroes.  They want inspiration.  They want to read stories that give them something to believe in. Pulp Nova gives them none of those things.  It just climbs down into the cynical mud, and rolls back and forth, inviting the reader to join in the misery.

No thank you.  Not when I can read stories with lines like this in them:

“All who fight tyranny are of my tribe.”