Red Vs. Blue: So You Want To Lose an Afternoon or Two… 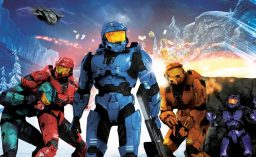 Every so often I find myself doing something completely inexplicable and retroactively justifying it to myself by saying “Well, maybe I can write about it for Castalia House.” Seriously, why CH hasn’t fired me yet, I have no idea.

So how about that Red vs. Blue, huh?

Red vs. Blue—RvB for short—is, or was, a machinima (look it up) webseries very loosely based on Microsoft’s “Halo” series. “Very loosely” translates to “We mention it offhandedly in the very first episode, them completely forget about it forever after.” So, you know, don’t expect any deep lore about the Fall of Reach or something.

Instead of trying to be an original fanfic story set in the Halo universe (which I assume there are, not that I’ve bothered to check), RvB is, or was, all about two inextricably and inexplicably opposed squads of soldiers stationed on (respectively) one of two bases in a box canyon in the middle of nowhere (these being the primary features of the original “Blood Gulch” multiplayer map from Halo: Combat Evolved, the setting of the series). The two squads—one designated “Red Team”, the other “Blue Team”, hence the name of the series—engage in a protracted, stalemated battle for control of a blind canyon that itself is of absolutely no tactical or strategic value to anyone. As Pvt. First Class Dick Simmons (Red Team) puts it, in the very first scene of the very first episode:

“The only reason that we set up a Red base here is ’cause they have a Blue base over there. And the only reason they have a Blue base over there is ’cause we have a Red base here. […] Even if we were to pull out today, and they were to come take our base, they would have two bases in the middle of a box canyon. Whoop-dee-f***in’ doo.”

In its original, and best configuration (“The Blood Gulch Chronicles”), RvB was a purely comedic webseries, the plot of which was a series of cheerfully nonsensical events that served no real purpose other than to allow the characters to run about, spout humorous dialogue, and suffer through a series of cheerfully nonsensical events. For example, early on in the First Season Church (Pvt. Leonard L. Church, Blue Team) is shot in the head by a teammate and (SPOILER!) returns as a ghost. He occasionally possesses other people in Blood Gulch, and even meets up with Sarge (Staff Sgt. Sarge, no last name, Red Team) in the afterlife, as Sarge suffers a brief, temporary case of sudden total deadness from getting shot in the head (later being revived by CPR). Church then takes over a robot body and jumps in and out of the body as needed in order to cope with teammates and enemies running into mercenaries, getting hoodwinked by con men A.I.’s, getting pregnant by passing aliens, and…

Look, I said it was crazy, okay? Just believe me.

So it’s cheerfully nonsensical. But is it FUNNY? Humor’s a highly personal thing, greatly depending on the taste of the viewer. Take a look at this. If it tickles your funnybone, you’ll like “The Blood Gulch Chronicles”. Alternately, if you think to yourself “It’s just a bunch of dudes bobbing their heads”, then this isn’t the Comedic Sci-Fi machinima webseries for you.

That said, the series takes a sharp left turn in Season 6. It abandons the “all-humor, all the time” format, abruptly becoming a mostly-serious Drama-Action Sci-Fi machinima webseries. Frankly, it suffers for it. As a character-centric, dialogue-driven comedy, little things like continuity and characterization are mutable at will to help make a joke. Drama demands something different. (Which is why Church is no longer a ghost after Season Six, being retconned into something else.)

Moreover, both Red and Blue Teams are comprised of people who are, to a greater or lesser extent, pretty much insane. In a comedy, this is a big plus, as much of the humor derives from one insane person butting heads with another. In a serious drama, though, the characters stand out like six facepaint-and-floppy-shoes clowns joining Seal Team Six. Even if you issue them M-4’s and rucksacks, and they get to be pretty good shots, it just doesn’t quite work. They TRY to include humor, but it often seems forced or out-of place. After all, clowns aren’t spec-ops soldiers, and Down Periscope isn’t Crimson Tide. (This is probably why later seasons usually focus on new characters, characters better suited to a drama.)

Having recently watched the entirety of Red vs. Blue (all of Seasons 1 through 15), and having started watching it over a decade ago (I believe Season 1 was just getting going when I first saw it), I greatly prefer the nonsense and humor episodes. They’re light hearted and funny, well suited to livening up a slow afternoon or lifting a dark mood.

As a dramatic series, Red vs. Blue often drags, and sometimes verges on the too serious. It’s lost a lot of the spark that made the earlier seasons so delightful. It’s no coincidence that my favorite of the recent seasons is 14, which consists entirely of unconnected, non-continuity shorts using different versions of the characters and radically different animation styles (some anime inspired, others cell-shaded computer animation, and yet others live-action). Freed of the necessity for continuity and drama, they could be funny again. And were.

RvB is highly successful and highly popular, enabling its creators (Rooster Teeth) to build an entire studio around their various animated series. And, even if they’re not as good as the first five seasons, the latter seasons are mostly decent.

Just be careful. Pause to watch one episode, and you may find yourself inexplicably watching the entire thing, then retroactively having to justify it to yourself.

Don’t worry. I won’t tell anybody.

(NOTE: RvB is available in episode format on YouTube (link above) or in a compiled “movie” format on Netflix.)