A lengthy letter from Bryce Walton in a previous issue kicked a real hornets nest in La Viz, it would seem, so I’ll go ahead and include the relevant part of it along with some of the letters that respond to it from the Winter issue. After some commentary on the previous issue, he gets into the meat of what many letter writers from the subsequent issue seek to address:

“However, for the sake of discussion, there are general themes used repeatedly in STF that make me very illogically and make me very uncomfortable sometimes. Such as:

Worth noting that with 70 years hindsight, Walton’s not only wrong on a lot of counts, he’s wrong to the point of looking incredibly foolish.

Did Communist Sleeper Agents in the US attempt to undermine Science Fiction by asserting that fun adventure and beloved SFF tropes don’t jibe with the post-capitalist society that we were clearly heading for in 1946? Henry Elsner, Jr seems to do just that:

All stories concerned with interplanetary wars, space piracy, pioneering, racketeering, etc., are taking for granted that present economic operations will continue unchanged. But, even today, the advances of science and technology are bringing the day close at hand when the method of buying and selling goods for a price, using money, will have to be abandoned, with a scientific method of distribution taking its place. And what effect would this have on the future! War, with the elimination of buying and selling, would cease to exist. As money would no longer be used, space pirates, interplanetary police and what-have-you would also have to go. Consider the exploration of a new planet. With machines doing most of the work, let us take mining as a specific example. The rough-and-ready drink-hard, die-hard miner would cease to exist. Educational standards of the time would be such that the staff of trained technicians required to man the machines would not be the type to engage in drunken brawls and fist-fights.

This same commie shill offers “a brickbat for “Lorelei of the Red Mists”.” I think this guy went on to eventually write a book about Technocracy, and I would be unsurprised if he is also the same guy who wrote a bunch of books about trains.

Bill Oberfield sends up the nudniks and unpleasable elements of fandom:

“I have just completed a poll of what the readers want (from the Viz).

Then who is the villain, the Ed wants to know?

Why we’re only readers, so don’t be a lout!

That’s for the authors; let them dope it out.

And no evil rulers for heroes to hound,

but plenty of action in space and on ground.

Make the hero a right guy, like me or you,

but don’t let him think like you or I do.

And we want happy endings, all free from strife,

in which the brave hero mustn’t give up his life.

No! No dames in the mag, for that is so lewd.

Just trim curves in clothing, not quite in the nude.

And mind you, the stars must be reached in a day,

That’s a new plaster job and you might make it fall!

There are, also, some more typical letters…

Monroe Kuttner begs for no nudes on the covers of Planet:

…drag out the button-hooks men, we’re undone! Nude fems on the cover!!! At last a mageditor has taken the fatal step. Please—no nudes is good nudes. Don’t ruin what’s left of STF’s name. Scantily dressed is bad enough. NO cover nudes. Ten to the twenty-seventh times, NO. 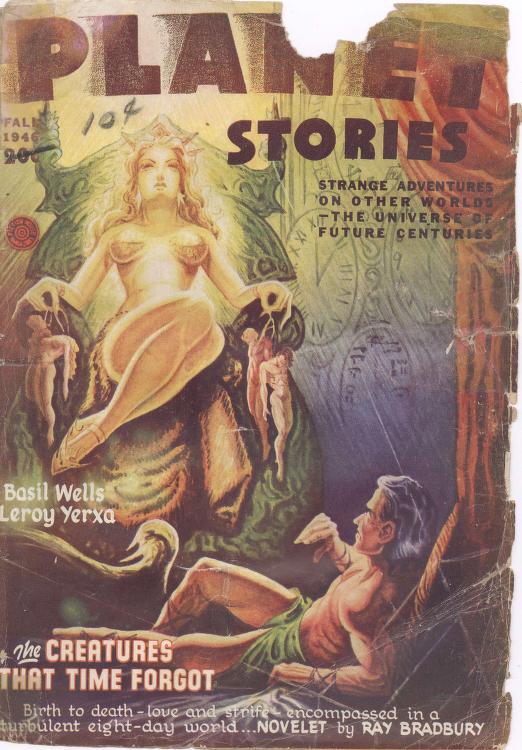 The cover is Walter A Coslet’s least favorite part of the magazine, but he doesn’t seem to like the stories much, either:

As for your statement that, when people stop buying PLANET, it will be time to start monkeying with the cover, please understand I buy it in spite of the cover. At least try a space scene—or are you afraid you’d lose your job?

As for the fiction, I think you’re in a rut. Practically every story (and not in this issue alone) seems somewhat drab and drawn-out. It puts all your stuff in a class by itself, almost at the bottom of the STF list. If it’s any consolation, though, I’ve read duller stuff in books. Rest assured, I probably wouldn’t buy your mag if I didn’t want to keep  my collection as near complete as possible.