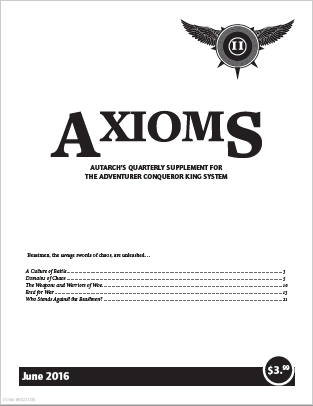 I really did love getting gaming magazines back in the day. Dragon. Space Gamer. Autoduel Quarterly. JTAS. Challenge. Roleplayer. Somehow I seemed to get more mileage out of a pile magazine articles than I did from a big production hardback gaming supplement. Maybe that’s because the writers tended to put stuff together from things they were actually playing, I don’t know.

Anyway, I get sad sometimes because all those old magazines are gone. But it doesn’t last long because thanks to the gameblog scene we have the equivalent of dozens of gaming magazines to choose from right now. And they’re all in print… forever. I don’t have buy them with a crease down the middle where people had bent them over in the rpg racks at the game store. Even better, the quality of the articles tends to be a lot better than what I grew up with.

My favorite gaming magazine at the moment is Axioms for the Adventurer Conqueror King System. I’ll explain why by taking you on a tour of this second issue in the series. (My quick rundown of the first issue is here.)

“A Culture of Battle” — The neat thing about ACKS is the way that that it creates streamlined rules to nail down intangibles that are taken for granted in the older rulesets. For instance, the proficiency system deftly codifies just what exactly the old Expert Set specialists really are from a rules standpoint in about the same way that the ACKS rules nail down the domain aspects of classic D&D. The thing about this is… most people wouldn’t think to apply this sort of thinking orcs and kobolds and bugbears. But that’s exactly what this is.

Now, everybody has their own way of running the humanoid monsters. And this is nothing like what you see in, say, Three Hearts and Three Lions. But this approach embraces the classic pig-faced orcs of the seventies, provides them with a logical explanation, links them to the bread and butter tropes of fantasy gaming, connects them to easy to play rules straight out of the core book, and puts them into a frame along with a dozen other monsters that just plain makes sense. All in a very un-Tolkienesque manner I might add! This is both intriguing and easy to run with in the context of a frantic game session.

This is some surprisingly graceful design work in an area where most fantasy games tend to go with a much more derivative approach.

“Domains of Chaos” — Okay, I’ve never been big on setting. And my campaigns peter out well before anyone gets to the domain stage. You’d think I’d just skim this and move on, but again… in what could have been a “filler” article, but once again, ACKS delivers answers to longstanding gaming problems that you wouldn’t even think could be solved.

Take this idea of the wilderness and the various castles that pepper the hexes of the campaign map. It goes all the way back to the hints and fragments of Original Dungeons & Dragons Book III and what most people would think this should be is nothing like what went on at the tabletops of the period. Combine this with typical reactions to Keep on the Borderlands. “Why are so many different monster types living in the same neighborhood. It’s weird!”

That’s actually a fair amount of confusion there. Rules for allowing chaotic fighter to rule over beastmen and wield armies of monsters, Traveller-like rules for determining what sort of monster lairs are in wilderness hex, tables for determining what sort of monsters show up to join a chaotic domain, and breakdowns of just what sorts of troops these monster homesteads would yield…? This is again some surprising design work covering a topic that is generally hand waved. And I honestly never imagined that someone could actually make sense of this stuff!

“The Warriors and Weapons of Woe” — There’s nothing stopping you from taking monster stats and just rolling with them. There’s good reason for Tunnels & Trolls monsters to be reduced down to single Monster Rating, after all. Most of the time you don’t really need to think about why something is precisely the way that it is. You just need to keep the game moving!

But what about when you want to do something a little different? I never do… mostly because I never imagined that the classic D&D monster stats can be broken down and explained the same way that people do with Traveller laser pistols. I admit it, I cruised on past this article as being irrelevant the first time I saw it. Now I’m astonished. Those Armor Class, damage, and move ratings don’t have to be arbitrary. In fact… they can actually mean something. Knowing where they come from and what the thinking was that went into them makes the tweaks for bumping them up into champion and chieftain types that much more interesting.

“Bred For War” — Sometimes treating monsters as monsters is not sufficient. Sometimes you do want to give them the same level of resolution as a player character. Why? Well, players inevitably cast charm person on monsters and then get used to having them around. People don’t tend to push for playing monsters like the did in the bad old days anymore, but playing a monster henchman as a PC is liable to be a good idea sooner or later. Going back to town to “meet” a new player character isn’t always feasible, after all.

One surprising thing is slipped into these rules: Beastmen can multi-class. Or maybe it’s a type of dual-classing? Or is it the new bard rules…? I’m not sure. But beastmen can switch from Warrior to Witch Doctor and back… and become a Shaman if they want as well. They keep their mage and cleric spells after they go back to bashing heads for a living, too. I’m enough of a purist that this should make my head explode, but it doesn’t for some reason. I guess it’s because it’s just really tough being an beastman in a humanocentric setting. It doesn’t feel like a splat book mentality. It feels like the Platonic Ideal behind the game we’ve been playing for decades.

This section has playable classes for orcs, bugbears, and kobolds. It also has rules for making custom classes of these types just like the ones from Player’s Companion.

“Who Stands Against the Beastmen?” — Adventure naturally takes place on the frontier between civilization and the wilderness. Here is more information on just what is going on out there… this time with a Roman theme. This explains some of the design choices of The Sinister Stone of Sakkara.