REVIEW: Dreadnaught (Beyond the Frontier, Book 1) by Jack Campbell 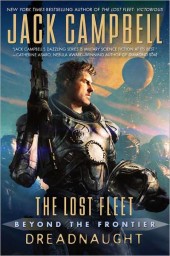 Dreadnaught, the first book in the Beyond the Frontier series, picks up just one month after the last events of The Lost Fleet series, although if you haven’t read those first six books you can still follow what’s going on in this new series.

The Lost Fleet was about the war between the righteous but flawed Alliance and the evil Syndicate Worlds, both human interstellar civilizations. But we also learnt there that the mysterious aliens of the Enigma Race might be the real force behind that war that kept humans fighting each other for a hundred years. Campbell shrouded the Enigma Race in such a mystery that the expectation for this new series was very high.

The best thing about Dreadnaught is that Campbell keeps compounding the mystery of the non-human forces by adding new questions. The worst is that we really do not get many answers, although knowing the author this is not all that surprising. And, anyway, this is the first book of a new series, after all.

The book begins about one month after the events of Victorious. Essentially we’ve only missed Jack Geary’s honeymoon with Tanya Desjani. But Geary tells us about it later in the book. The first chapter is all about the bureaucrats being cartoonishly nasty to Admiral Geary and his fleet. A short-sighted nastiness that brings the entire Alliance to the brink of civil war. All those pages read like Campbell is trying to convince us that the Alliance is ruled by a gang of idiots who desperately need to be kicked out by a strong military leader—like Geary. And we are told that the people would cheer that, unsurprisingly.

But Geary is the quintessential loyal officer. And, of course, we knew that the civil war couldn’t happen because this series had to be about going out into the unknown to find out more about the Enigmas and the fleet wouldn’t do that in the middle of a civil war.

So the civilian leaders tell our hero:

Your orders are to go back there, only this time you’re not to halt at the border the Syndics have maintained with the aliens. You are to enter the regions claimed by the aliens. And since we know what has happened to many Syndic ships at the hands of the aliens, you’re going to have a strong force with you.

Got more spaceships, will travel… into the unknown… and I’m all out of chewing gun. However, we do not get there in a rush. First, the fleet has to go through the Syndic Worlds, where they witness the results of their own past actions. Predictably, the Syndics are in very poor shape and are beginning to take the alien threat much more seriously than just leaving a Reserve Flotilla guarding the border.

Campbell is best when he is describing the huge fleet actions but this time the Alliance doesn’t have many left Syndics to fight. And the Enigmas are so alien that the battles lack the choreographic panache of The Lost Fleet. Now Geary can’t anticipate the enemy movements and reactions because he essentially knows nothing about that civilization. It begins to feel like the great military leader will turn into an explorer. And then Campbell adds some rather unexpected elements into the mystery.

It is already obvious that when Campbell adds so much teasing and mysteries it’s because he is warming up for the next book. He’s done it in the previous series and that’s exactly what he’s doing in Dreadnaught, getting ready for a juicy next one: Invincible.