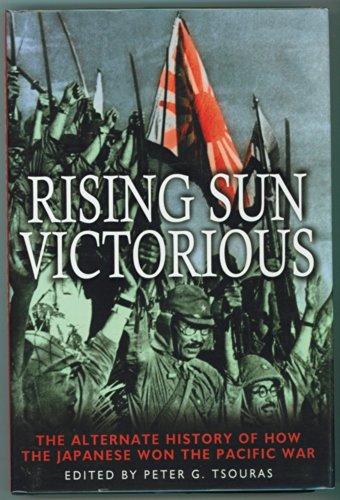 One of my favorite genres is alternate history. I think the first alternate history piece of fiction I ever read was L. Sprague de Camp’s Lest Darkness Fall and his The Wheels of If shortly after.

I enjoy essays on alternate history. A very interesting one on web years ago had Paul von Lettow-Vorbeck, commander of German forces in East Africa in WW I, becoming leader of Germany in the 1930s while Hitler died in a street fight.

Peter Tsouras has edited several anthologies of military alternate history including Hilter Triumphant  (2006) and Disaster at D-Day (1994). One that I bought upon publication was Rising Sun Victorious (Greenhill Books, 2001).

The book contains ten counterfactuals of Japan winning in WW2 or getting its negotiated settlement.

“Hokushin: The Second Russo-Japanese War” by Peter Tsouras has Hitler pressuring the Japanese with a full court press before Operation Barbarossa in 1941. The Soviets stripped out their best divisions from Siberia in summer 1941 which are lost in great encirclements at Kiev and outside of Moscow. The Japanese have a successful offensive from Manchuria and seize a part of the Soviet Union’s Far East.

“Be Careful What You Wish For: The Plan Orange Disaster” by Wade G. Dudley. The Japanese don’t attack Pearl Harbor but the Philippines. The U. S. Pacific Fleet charges headlong to destruction under Adm. Kimmel.  This is one instance where Japan could have possibly achieved its goals.

“Pearl Harbor: Irredeemable Defeat” by Frank R. Shirer. Nagumo sends in the third wave on the attack on Pearl Harbor. Much more damage including the fuel tanks and the channel blocked by the sunken U. S. S. Nevada. Pearl Harbor is unusable as a base until April 1942.

“Coral and Purple: The Lost Advantage” by James R. Arnold. The Battle of the Coral Sea caused Adm. Yamamoto to make changes to the upcoming offensive against Midway Island.

“Samurai Down Under: The Japanese Invasion of Australia” by John H. Gill. The Japanese successfully take the island of New Guinea and decide to take Australia out of the war by direct invasion. I enjoyed this one quite a bit.

“The Japanese Raj: The Conquest of India” by David C. Isby. The Japanese attack India after successfully taking Burma. British control collapses holding on to Pakistan only.

“Guadalcanal: The Broken Shoestring” by John D. Burtt. Adm. Halsey does not replace Adm. Ghormley as commander of naval forces at Guadalcanal in fall 1942. Ghormley loses his nerve and evacuates the Marines from the island.

“There are Such Things as Miracles: Halsey and Kurita at Leyte Gulf” by Christopher J. Anderson. The Japanese pull out a miracle victory at the Battle of Leyte Gulf. Japan is able to negotiate a peace where it keeps Indochina, Manchuria, and most of China.

“Victory Rides the Divine Wind: The Kamikaze and the Invasion of Kyushu” by D. M. Giangreco.  The invasion of Japan has Pearl Harbor II with the destruction of thirty-eight Liberty ships, a score of destroyers, and twenty-one other vessels within sight of the invasion beaches by kamikazes. There is a Cold War with Japan going on in 1965.

This is an entertaining collection of essays, some are better than others. My view though is once the sneak attack on Pearl Harbor happened, there would be no Japan victorious. The Japanese were very, very lucky the first six months. Any number of things could have gone very wrong for them. That would make for an interesting collection of essays. Various nationalist and communist movements got a boost by Japanese victories against European colonial regimes. Indonesians and the Viet Minh might not have had a leg to stand on with Holland and France in firm control of their respective colonial possessions.