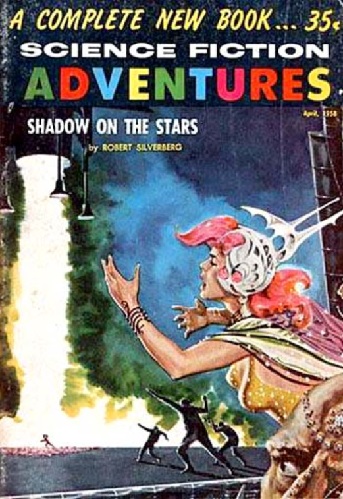 The eleventh issue of Science Fiction Adventures, April 1958 featured “a complete new book.” The cover by Emsh was for Robert Silverberg’s “Shadow on the Stars.” In a reprint of “Shadow on the Stars” (as Stepsons of Terra), Silverberg wrote that “Thunder Over Starhaven” must have been successful enough to warrant another novel “filling virtually an entire issue.”

“This time it was agreed that the story would appear under my own byline, since ‘Robert Silverberg’ was by now a better known name than any of the pseudonyms I had bee using in the magazine; and since the story would bear my own name, I was a trifle less flamboyant about making use of the pulp-magazine clichés beloved by the magazine’s readers. There would be no hissing villains and basilisk-eyed princesses in this one, no desperate duels with dagger and mace, no feudal overlords swaggering about the stars. Rather, I would write a straightforward science fiction novel, strongly plotted but not unduly weighted toward breathless adventure.”

The novel opens with Baird Ewing waking from suspended animation after traveling eleven and a half months from the human inhabited planet of Corwin to Earth. Corwin is in danger from an alien species, the Klodni, originating from the Andromeda galaxy. The Klodni are overwhelming human inhabited planets one by one. Corwin seeks help. Bair Ewing finds Earth is full blown last stage decadence. The former Earth colony on Sirius has come to dominate Earth with plans to make it an outright protectorate in a year or so. Earth has no spaceships, no defenses, the government has now power.

An interesting facet of the decadence is body modifications, piercings including studs on the skull, mutilations such as ear removal. This was prescient.

Part of the novel deals with the Sirians kidnapping and torturing Ewing thinking Corwin is out to prevent Sirius’ takeover of Earth. There is a deus ex machina rescue of Ewing by a masked stranger. Ewing finds the College of Abstract Science has a machine that makes the College of Abstract Science a microsecond in the past to protect it. They have temporal control. This is the main part of the novel. Ewing uses the machine to go into the past to rescue himself. You the get into time paradoxes with multiple Baird Ewings running around.

Two of the Ewings steal the temporal control technology to defend Corwin. The climax dealing with the Klodni is almost anti-climactic as their fleet is sent seven billion years into the past, before the universe exists. One of the Baird Ewings goes back to Earth at the end to help organize resistance to the Sirians.

This was a fun novel. Ace Books reprinted a few times including the late 70s and early 80s. One could do far worse than reading Stepsons of Terra.

There were two very short stories in this issue of Science Fiction Adventures, neither were memorable. They were just filler.

The cover for this issue would be reused a few years later for the Lancer Books anthology, Great Science Fiction Adventures. 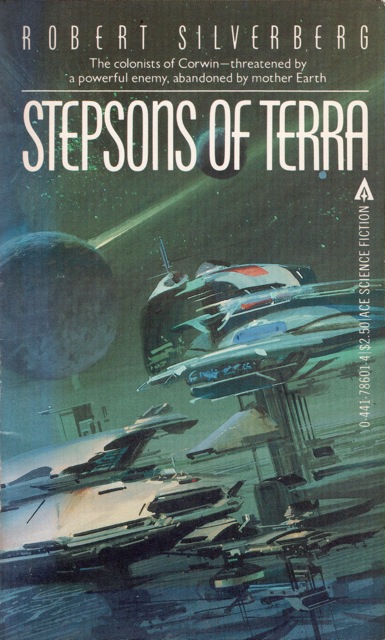