RPG (Blackgate.com): I’m still unpacking the boxes I brought home from the Fall 2017 Games Plus auction. There’s so many SF and fantasy board games being published these days that it’s impossible to keep up. But you know, I do my best.

A week after the auction, I dropped by Games Plus in Mount Prospect to grab a handful of new releases I had my eye on. There in the sale bin was Dungeon Dwellers, a “cooperative card game for 2 or more players” released in 2014. Now, I still have a stack of unopened auction games in my living room, slowly collecting dust and making my wife cranky. But I love dungeon games, and I especially love cooperative dungeon games. And the thing that especially makes me weak in the knees is a deep discount. Ten minutes later I left the store with Dungeon Dwellers, wrapped in a paper bag so I could stealthily sneak it into the house.

Appendix N (Reactionary Times): ?Okay not really a hero. A few notes about Poul Anderson’s The Broken Sword. It was written in 1954, you can tell it 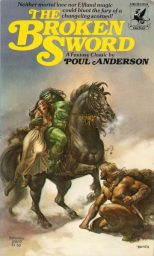 was written in 1954 because it couldn’t be written today. This is a work of high tragedy that is strongly influenced by the Norse sagas.  If you like Game Thrones but would prefer that it be written by a non-sadist that can actually fit a story that should only take two hundred pages, into two hundred pages.  This is the book for you.”

Gaming (Jon del Arroz): I don’t usually review too many non-fic books here (well I did Scott Adams), but I just read  Dangerous Gamers: The Commentariat and it’s war against video games, imagination and fun. I have to say this is probably the most poignant and relevant analysis of our culture and it’s direction I’ve ever read.

Fiction (Pulp Archivist): When reading Shambleau and Other Stories as part of the Puppy of the Month Club, The Frisky Pagan, Jon, and I came across pernicious accusations that C. L. Moore’s “Shambleau” was essentially a space-western–with all the anti-imperialism that this implies. Since reskinning westerns as space stories was more properly an artifact of the 1960s, 70s, and 80s, this appeared to be yet another instance of science fiction critics aggressively forcing old stories into modern molds to find the earliest version of the modern form, a tendency that was already old in the Campbelline era.

Gaming (Save Versus All Wands): I’m taking a three-day break from demons to talk about something I rediscovered while looking for demons. I’m sure what I’m about to point out has been mentioned before, though I don’t have a reference. In Men & Magic, after detailing the three character classes and

Other Character Types: There is no reason that players cannot be allowed to play as virtually anything, provided they begin relatively weak and work up to the top, i.e., a player wishing to be a Dragon would have to begin as let us say, a “young” one and progress upwards in the usual manner, steps being predetermined by the campaign referee (p. 8).

Gaming (Walker’s Retreat): The lootbox issue with Electronic Arts will have consequences that go far beyond that company. Not only will all videogames be affected, all gaming will be affected. The various governments across the world looting to place regulations or bans on lootboxes by proclaiming them to be a form of slot-machine gambling (which they are), directly affects other genres of game whose business model rests on this concept.

Appendix N (Mighty Thor Jr): The big, dumb barbarian – I don’t know where this misconception originally came from. It could have been pastiche, which often portrays Conan and other sword and sorcery barbarians as ignorant brutes. It could have been the comics, which, as much as I love the Roy Thomas stuff, did portray Conan as not much of a thinker. It could also be RPG’s, where one a few stats have to be lower than average to have a few stats 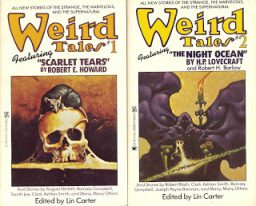 higher than average. For barbarians, Intelligence is generally the dump stat.

Fiction (Tolkien and Fantasy Blogspot): Carter managed to get four issues done, though their subsequent publication was sporadic and spread out over three years. It is interesting to note that Carter had apparently turned in to the publisher all four issues previous to his March 1980 interview, for a note in the same issue as the Carter interview gives news from Roy Torgeson that “four issues are complete at this time” and the first issue of the quarterly will a appear in “July at the latest.”

Gaming (North Wind Adventures): on.Astonishing Swordsmen & Sorcerers of Hyperborea is sword-and-sorcery role-playing at its pinnacle. Now in its second edition, AS&SH™ has been expanded to include new classes, new spells, new monsters, new magic items, and more! It also includes a new, full colour map, an introductory town and adventure, as well as hundreds of new illustrations!
​
This game’s milieux are inspired by the fantastic literature of Robert Ervin Howard, Howard Phillips Lovecraft,  and Clark Ashton Smith. Game rules and conventions are informed by the  original 1974 fantasy wargame and miniatures campaign rules as conceived by E. Gary Gygax and Dave Arneson. 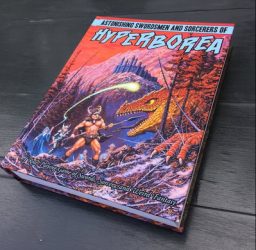