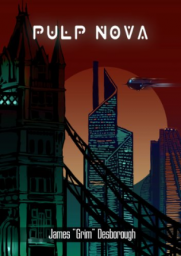 Pulp Nova represents James Desborough’s attempt to recapture the spirit of the Golden Age of Science-Fiction.  Written back in 2013, Desborough recognized even back then that the self-publishing made possible by changing technology was creating a publishing environment similar to that of the pulp era.  The easy cost of production gives free rein to writers to experiment with new and unusual forms of storytelling unencumbered by the heavy burden of massive back-end costs. No doubt, his experiences in the self-publishing corners of the role-playing game industry played a role here – Desborough has maintained a solid and successful presence with the RPG hobby for years.

While he likely views the growing Pulp Revolution with a touch of wry amusement, he is a savvy enough marketer to recognize the Johnny Come Lately’s within that movement as a collection of fans tailor made for Pulp Nova.  Lately, he has offered Pulp Nova as something for Pulp Revolution fans.  So let’s look at how well his stories fulfill that promise.

Geneaology, that’s the thing. People like to know where they came from and who they’re related to, what their heritage is, and what it means to be them.  It’s nonsense, of course.  Who we come from doesn’t make our destiny, doesn’t dictate what we do.

If you’ve read Lovecraft, you know our narrator is in for a rather rude awakening. Desborough has a clear understanding of what makes Lovecraftian fiction work, choosing to slowly ratchet up the tension with a near fatal accident which strands the narrator in a remote sea-side area where is only source of solace is a sea-side inn managed by a family that seems a little off.  He checks off all of the usual checkboxes that hint at the influence of primordial creatures from the sea, ancient gold, dusty tomes, churches buried by the tide, and even a few hints at human-other breeding.

His prose isn’t at Lovecraft’s level, but that’s hardly a mark against this work. Desborogh’s prose is very good, and his chooses his setting and descriptors carefully.  He doesn’t fall back on the typical mistake of using needless obscure words, but manages to convey the same sort of off-beat creepiness of a place not-of-the-human-world just fine without them.  Consider how Desborough describes a meal among the seaside innkeeper and his family:

Butter melted over the potatoes, even though they were barely done. If formed a slick, oily puddle around the limp, white fish that squatted on the plate, taunting me.  The edge of the fork wouldn’t cut it, it was barely cooked at all, I had to tear at it with my knife to pull translucent, rubbery mouthfuls from the fillet.  Not that this seemed to bother my hosts whose open mouthed chewing surrounded me without any sense of shame or manners.

Nothing in that passage is otherworldly, but when you pile descriptions like these up on top of each other, one after the other, what you get is a very creepy household. This entire story is built like this, just a gradual descent into the depths that results in a vague sense of doom for our poor narrator, but one that is as certain to be unpleasant as it is left to the reader’s imagination.

Desborough doesn’t make the usual mistake of shining too bright a spotlight on the menace. The final confrontation ramps up to a wonderfully evocative moment not fully remembered by the narrator.  (It does leave him with an understanding that his own fate lies at the bottom of the sea, one way or the other.)  Desborough’s ability to convey significant detail with minimal description allows the reader’s own imagination room to fill in the details.  It’s an old trick, but it’s one that is harder to implement than it is to describe.  And his skill here is a refreshing departure from the ‘in your face’ and blatant style of Lovecraft pastiche that is all too common today.

All of this adds up to a solid introduction to Desborough’s take on the pulp ethos. If the rest of the stories in this collection live up to the high mark set by Cichol’s Children, then this volume will be worth a read.