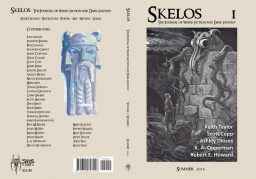 Within the past year, three small press magazines have appeared: the resurrected Weirdbook, Cirsova, and now Skelos. Weird Tales appears to be permanently dead. Modern technology has allowed home publishing, something you could only dream about doing twenty years ago.

Skelos takes its name from The Book of Skelos, a forbidden tome mentioned in Robert E. Howard’s Conan story, “The Pool of the Black One.” Skelos Press is the imprint owned by Jeff Shanks.

The magazine has three editors: Mark Finn, Jeff Shanks, and Chris Gruber. I have never seen three editors before for a magazine. The only time I can think of two editors is J. Francis McComas and Anthony Boucher at The Magazine of Fantasy & Science Fiction in its early years.

I know all three editors and also a good number of the writers for this issue.

The magazine was bankrolled for four issues by a crowd funding/kick starter effort to come up with the necessary operating capital.

Mark Finn wrote the introductory editorial attempting to get his arms around the concept of weird fiction. He states that the magazine will be 70% prose and poetry and 30% criticism, essays, and reviews. He admits they are not sure just what fiction they are going to run. It will be what they like.

The submissions guidelines states stories and essays up to 5,000 words.

“Skelos likes werewolves and vampires just fine, provided you do something new with those old chestnut.”

So, the editorial direction appears to be what is called “new weird.”

The first story “The Dead Unicorn” by Scott Cupp gets things off to a bad start. It is a nihilistic vignette about a dying unicorn torn apart by a swarm of demons in a village. Disease spreads to kill the villagers. It ends with a disease infected puppy escaping into the woods to spread it further. What is the point of this?

For me, the highlight of the magazine issue is Keith Taylor’s “The Drowned Dead Shape.” This story features Nasach the Firbolg, who first appeared in 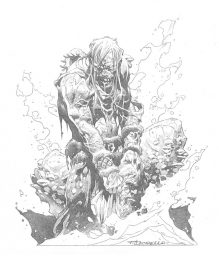 “Hungry Grass” in Swords Against Darkness V back in 1979. The 1970s was a golden age of sword and sorcery fiction with Karl Edward Wagner, David C. Smith, David Madison, Charles Saunders, Richard L. Tierney, and Keith Taylor. In this story, Nasach and his crew are in a currach, an Irish hide covered boat. Something evil is following them on the open sea. Remember how I said Lovecraft’s Deep Ones were tailor made for sword and sorcery fiction a couple months back? Here it is.

The story has a great illustration by Tomas Giorello. I  probably would have used this as the cover for the magazine.

Charles Gramlich loves sword and planet fiction probably more than anyone I know. His “Hungry” is a change of pace for him. It is a science story that leaves you queasy at the end.

“The Night Maere” by Scott Hannan is a horror story with a sort of haunted house theme to it.

Now we get into the essays. Jeff Shanks’ “Nameless Tribes: Robert E. Howard’s Anthropological World-Building in ‘Men of the Shadows’” is real deep nerd stuff. This for you guys (like myself) who just about memorized Robert E. Howard’s “The Hyborian Age” or went through the appendices in Tolkien’s The Return of the King. It turns out that Robert E. Howard wrote three drafts that are called “The Nameless Tribe” that was the basis of the Bran Mak Morn story, “Men of the Shadows.” Jeff goes into the changes and expansions with each draft. The cherry on top is the inclusion of those drafts by Robert E. Howard. I never get tired of reading the least scrap written by him.

“One Less Hand for the Shaping of Things” by Jason Ray Carney is a more modern type of story but with a bit of old fairy tale about it. It started out more like a generic fantasy story but the last third morphed into fairy tale with a nice ending.

“Grettir and the Drauger” is an adaptation of the Grettir story with illustrations by Samuel Dillon. 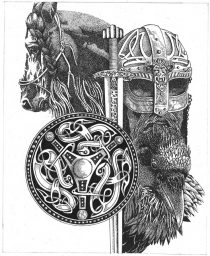 Karen Joan Kahoutek is another amateur press member who provides “From the Cosmos to the Test-Tube.” The essay goes into the philosophy of Arthur Machen and debunks some of the myths that he had some sort of Christian basis of his weird fiction.

David Hardy is the only person in the world that I can discuss the Royal Netherlands Indies Army (KNIL). Dave more often writes historical adventure and some westerns. This is a weird story of the yellow fever outbreak in Philadelphia in 1793. The narrator is unreliable as the story proceeds. Is the story supernatural or not? Depends on if you believe the narrator.

I started reading Matt Sullivan’s “The Burning Messenger.” I recognized this story, it was in Swords Against Cthulhu last year. This is quite unusual. The story has been revised some for this appearance. It is essentially the Vikings vs. The Colour out of Space.

Nicole Emmehainz had an essay in last years’ The Unique Legacy of Weird Tales with “Strange Collaborations: Weird Tales’s Discourse Community as a Site of of Collaborative Writing.” Her contribution here is “A Sword-Edge Beauty as Keen as Blades: C. L. Moore and the Gender Dynamics of Sword and Sorcery.” This is an identity academic piece.

“In essence, I argue that ‘sword and sorcery’– what I understand to be works written in a pulp fiction style that features central action and combat with supernatural entities in a pre-modern setting–has the potential to be understood as a feminist genre, or, put another way, a genre that demonstrates acute awareness of the social construction of gender and its expectations.”

“Pulp fiction style” is a term thrown out here without a definition. Pulp fiction style is something very different in 1914 from 1944. Emmehainz might be alluding to a fast moving narrative more accurate for hard-boiled prose of Black Mask magazine than Weird Tales. The problem with that is neither H. P. Lovecraft nor Clark Ashton Smith wrote in what could be called a “pulp fiction style.” Even A. Merritt and C. L. Moore herself with the Jirel stories don’t fit the definition. I disagree that sword and sorcery is necessarily an action story. I view Clark Ashton Smith as the Jachin to Robert E. Howard’s Boaz.

“In spite of the cultural phenomena’s commonplace depictions of women as sexualized objects, I nevertheless assert that the genre is particularly suited for producing fictional worlds, feminist utopic space of the imagination, where constraints imposed because of gender can be cast aside and where sexually-marked bodies are source of power…Gender becomes a strategic performance rather than an essential source of identity…In a political scope, a genre must express a political ethos, directly or indirectly, to the extent that it helps de-reify normative principles of gender by creating a virtual world where women and men can liberate themselves from the constraints their gender identity forces upon them…Such a genre fictionalizes worlds that represent worlds that represent gender not as an undeniable essence or biological inescapability but as a constructed identity linked to costume, strategic behavioral displays, and socially status positioning.”

There is more but you get the idea. What language is this?

The last story is Ethan Nahte’s “Dangerous Pearl.” Ethan made a documentary on Robert E. Howard ten years ago. I wonder what became of it? This is a pirate story that is also a horror story. It has a pretty interesting idea. I like William Hope Hodgson and up for a good sea horror.

I scanned over the poetry. I am no poetry expert. I do like some of Robert E. Howard, Donald Wandrei’s, and A. Leslie Scott writing as “A. Leslie” in Weird Tales. I know three of the poets and poetesses.

The book reviews are of mostly recent books including two long reviews of J. R. R. Tolkien, Robert E. Howard and the Birth of Modern Fantasy. There was one review of a 2000 reprint of John A. Dinan’s The Pulp Western (Borgo Press, 1983). This struck me as a bit past the expiration date though a good essay could be created using the book as a basis.

Layout of the magazine is double column. Type is easy on the eye. There were some typographical errors, mainly in the Keith Taylor story. There were a few pages with about 1/3 of a page left blank. I would quibble that art often takes up too much space on a page but I am not an art guy. Overall, a good presentation first time out of the gate.

After reading the issue, I figured future issues would contain one story by a professionally published author, an over representation of the amateur Texas writer’s mafia, lots of art, non-fiction pieces, and book reviews. If fiction is limited to 5,000 words, some weightier stories are going to be missed.

Fiction magazines often have a grab-bag approach. Often editors throw anything against the proverbial wall to see what sticks. It appears a broad approach to fiction will be the order of the day with Skelos.

The inclusion of non-fiction just might put the proverbial bullet through the head of The Dark Man: The Journal of Robert E. Howard Studies which has had an extremely erratic publishing schedule for ten or more years.

The next issue is supposed to contain fiction by Adrian Cole, Scott Oden, and Howard A. Jones (not the New Wave singer/keyboard player). So the professional component is increasing.

I noticed a complaint in a review that there were too many stories with northern European or faux northern European settings. Believe me now and listen to me next week, two of the editors would jump at getting stories with less common locales and cultures. You can’t conjure up as an editor what you want, you have to take what is submitted. This strikes me as cheap-jack virtue signaling. My response is to ask how many Harold Lamb or Charles Saunders stories has the accuser read?

So, there is another small press magazine to check out if you are so inclined. It is good to have new stories from Keith Taylor and Adrian Cole.