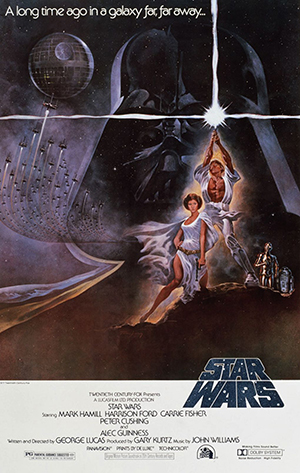 Even the poster stole.

Here is the narrative: Science Fiction was a tiny genre, largely ignored by the general public, a niche of a niche, only appealing to teenage boys… until Star Wars. Then, it got big.

Star Wars blew up so big, they had to coin new terms to describe it: summer blockbuster. It was so big, it drove millions and billions in sales of toys and books and dozens of other movies. It was so big, it made Sci-Fi popular for the first time EVER. Men and women, children and adults now loved SF, and the genre EXPLODED.

The narrative is a lie.

Back in the days of the Pulps, Fantasy & Science Fiction was read nationwide. It was read by teens and adults, by men and women. It was popular.

Then, unexpectedly, something happened. Just after WWII, the pulp magazines that had delivered fun and exciting SF stories to the entire nation began folding up. The audience drifted away, and the F&SF genre plummeted in popularity. Some blame post-WWII cynicism.

What really happened is this: The audience didn’t abandon F&SF. F&SF abandoned its audience. Its appeal became more selective.

Post-WWII was the era of the Campbellian Silver Age, the era of “Men with Screwdrivers” SF. Action and adventure were childish and frankly embarrassing, as were purple prose and laser swords. Barsoom? Silly. Buck Rogers? Childish. Northwest Smith? A gunslinger, not a scientist. And this was the age of SCIENCE.

Science was the focus, technology the touchstone. Stories had to be cerebral, intellectual. They had to be REALISTIC. Real science, none of this fuzzy-headed soft science stuff. SF had to shake off the wooly-headed thinking of Fantasy, the embarrassing antics of Space Opera, the adolescent focus on Adventure and Action. SF was serious business. Real Literature. It was time to grow up.

Folks, the audiences didn’t get smaller. The genre did. It threw away what had made it popular in the first place.

So when George Lucas came along, he found all the many various tropes and tools the Silver Age had discarded and derided, the laser swords and swashbuckling space battles, the roguish spaceman and his loyal sidekick, the space princesses and space magicians. The action and adventure and heroism. He found them buried in the dust, picked them up, dusted them off, and made F&SF fun again. Made it thrilling again. Made it inspiring again.

Made it popular again.

George Lucas stole Pulp. He stole its tropes, characters, and settings. He even stole its WRITERS. And people loved Star Wars. They loved it BECAUSE of its pulpiness.

Almost nothing in Star Wars was new. To the audience, though, it seemed new, because SF had buried its past, a past that should never have been buried.

Star Wars is existence proof that the Pulps should never have been forgotten.

(*Why this didn’t happen to other veterans, who not only read F&SF, but write it, veterans like John Ringo, Tom Kratman, Brad Torgerson, Nick Cole, and Sky Hernstrom is left unexplained.)