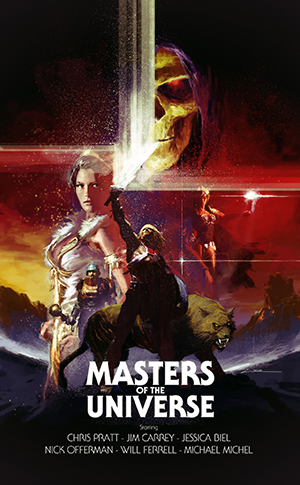 Not a real movie.

He-Man is what you’d get if you crossed Conan with Shazaam (aka DC’s Captain Marvel): a muscled, superhero barbarian that a muscled, but mild-mannered Prince Adam turns into thanks to a magic sword. The main character of He-Man and the Masters of the Universe, his animated adventures were (like so many 80’s cartoons) thinly-disguised advertisements for a line of toys. Which isn’t to say they were bad.

Which isn’t to say they were notably good, either. As a kid I loved it, but as an adult its flaws are glaring. That said, the show, while not being awesome itself, is a great source of awesome.

He-Man’s world, Eternia, is what you’d get if Jack Vance had written sword and sorcery for Stan Lee in the 1970’s. An alien planet, it’s stuffed from stem to stern with magic, high technology, and a bunch of superheroes / villains.

The very first episode is about a wizard trying to summon a mated pair of comets. He accidentally destroys one, and the survivor turns bitter and evil. Skeletor summons the vengeful Cosmic Comet to use its power to conquer Eternia. The heroes defeat the plot by creating a good comet from pieces of the evil one.

That is Pulp as HELL.

Every single episode is stuffed to overflowing with a dozen or more such ideas, any one of which you could use to spice up a tabletop RPG campaign.

As an example, Ep. 7 (“The Curse of the Spellstone”) has (SPOILER ALERT) a weather-control satellite; the Spellstone, which Evil-Lyn uses to wrest control of the satellite away from Man-at-Arms; the Region of Flame (a place where streams and lakes have lava flowing in them, not water); its inhabited by the Fire People (a fierce and xenophobic race), said Fire People looking like like faceless red spectres w/ red spectral weapons (that are nonetheless material); a ruddy-skinned, six-tentacled monster that lives in the lava and is vulnerable to electricity; levitating robots w/ clawed hands; a pit trap that dumps the heroes into a cavern, then drops a river on their heads; and the Creeping Horac.

The Creeping Horac was the worst punishment handed out in ancient times. It’s a motile oily, black goo, sporting a number of black tendrils. In olden days, criminals were locked inside their homes, and the Horac was released. It would overgrow the house, then rapidly fill the inside, killing the criminal. (GRIM!, especially considering this is a children’s cartoon.) TELL me that’s not a Vancian (or Howardian or Lovecraftian) monster.

ALL OF THIS HAPPENS IN ONE SINGLE HALF-HOUR EPISODE.

“The Time Corridor” (Episode 8), is an otherwise mediocre episode that nonetheless includes (among other things) the Time Corridor, allowing travel back in time; the Window of Time, which allows people to see the past; a spell to trap someone for all time; and is capped off by the entire cast traveling back to a sort of Savage Age of Eternia. This Savage Age introduces three new monsters: the dragosaur (a dragon-dinosaur), a carnivorous and tendrilled purple plant, and a giant maroon beetle with scorpion claws and a horn in the center of its head. Lesson? Even BAD episodes had nearly a dozen eminently stealable ideas. 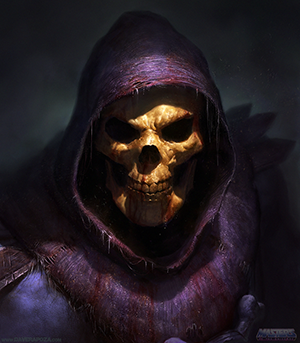 Skeletor: NOT a good guy. Good work ethic, though.

“The Dragon Invasion“—Episode 9—highlights some of the better qualities of Skeletor (left). Turns out, he’s the hands-on kind of Evil Overlord, a lead-from-the-front bad guy, not afraid to get into the mud and do some real work, really get his hands dirty (not like those lazy Emperor Ming-style Evil Overlords who stay at home stuffing their faces with bon-bons, sending their minions out one by one to get killed by the Plucky-but-Naive Hero). In the beginning of the episode he’s out stealing some dragon eggs. Sure Beast Man is pulling the cart with the eggs, but Skeletor’s right there stealing them, and even has to fight off the momma dragon who attacks the cart. Skull-man’s got a work ethic, is all I’m saying.

This episode features (in part): the Dragon Pearl (we find out later it magnifies magic by 100 times); a floating antigrav cart; a stasis ray; a plotting henchman, in the form of Beast Man; a fantastic growth serum, which grows full sized dragons from eggs in just under a minute; the Mystic Mountains and Swamp of Slime; a space portal which allows Skeletor to teleport all over Eternia; an unnamed shining bonds spell cast by the sorceress of Greyskull; and a shining barrier spell which prevents anyone from entering Grayskull while Skeletor does his thing.

Once again, I’m not trying to sell you on the series as a series. The animation isn’t up to modern expectations, and adults will likely have a hard time watching. I AM telling you that if you want to throw your players a curve ball, you could do worse than to pull up Netflix (it’s available for streaming) and watch an episode or two, stealing whatever bits catch your fancy.

This is PRECISELY how Gary Gygax created Dungeons & Dragons—Gygax stole from EVERYBODY. He could have filled an entire dungeon with stuff culled from just the first few episodes of this series, they’re that full of imaginative elements and sheer awesome weirdness. Follow his example—you are guaranteed to find something your players have never even thought of, that will really freak them out.

And isn’t that what Game Mastering is all about?