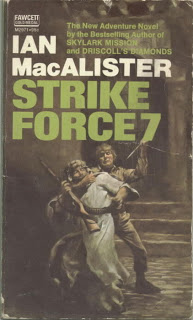 Two months ago, I wrote a piece about Marvin Albert writing as “Ian MacAlister’s” Skylark Mission. Strike Force 7 was the third novel under this pseudonym. Another Fawcett Gold Medal paperback from June 1974. Originally sold for $.95 cents. The cover has a distinct pulp atmosphere to it.

Strike Force 7 has a contemporary setting with Earl Jarrell, ex-British Army officer serving a three-year sentence for gun running. His Corsican partner secures his release from prison with a prospect of a job to revive their fortunes.

A revolutionary in Morocco has kidnapped the wife and step-daughter of a very wealthy American business man. It is a race against time to rescue the women before the clock runs out.

Jarrell and his partner Marcel put together a team of mercenaries with a woman journalist in tow who had interviewed Bel Zaara, the Moroccan rebel. They hope she can get in contact to give them a lead.

This novel would have made a great action movie. It still would make a great movie. You could see Jason Statham as Jarrell.

I am on my third Albert as MacAlister novel right now. The pacing is impeccable, dialogue is very good, characterization is three dimensional with likeable (and unlikeable) characters. What happened to the traditional men’s fiction market?