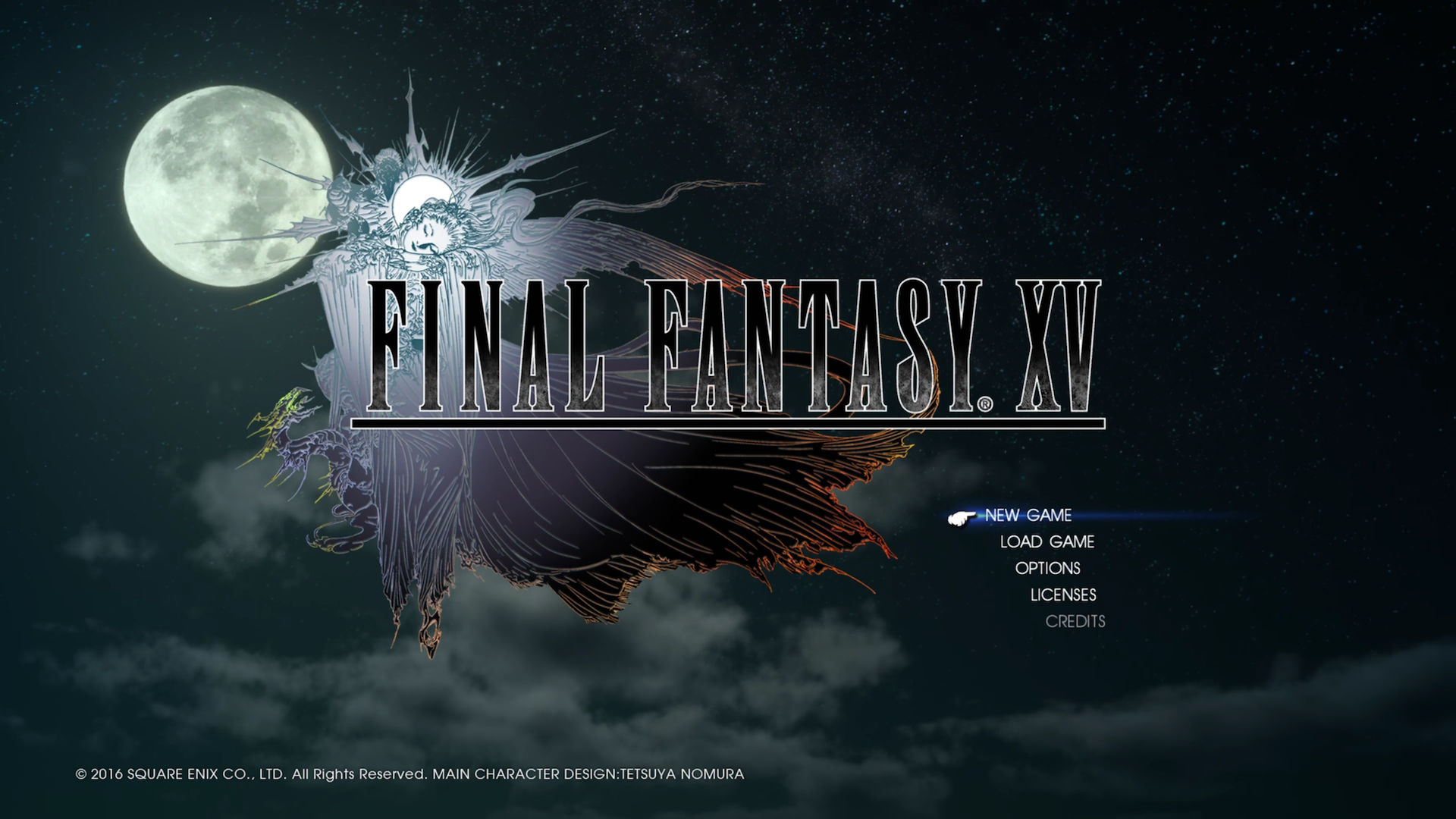 I discovered JRPGs back in the late 90s. I was maybe 16, at a friend’s birthday party– an all night affair conducted with all the gusto only teenage boys can manage– and one of my friends set me up playing Final Fantasy VII. I’d just really begun exploring anime, aided by dial up internet and a job cleaning my church that paid just enough to swing a trip to Suncoast for a VHS cassette  once or twice a month, and all of the quirks and tropes of anime were still new to me. A swordsman fighting alongside a guy with a machine gun hand, casting magic on scifi enemies (“Use lightning on robots,” my friend told me. “But don’t I have… like, points or something to worry about?” I asked.) was crazy in a way I’d never seen before. Final Fantasy captured my attention and drug me into a lifelong love of Japanese roleplaying games.

It was a good time to get attached to the genre; 1997, when FF7 was released, was smack in the middle of the golden age of JRPGs. The SNES was in the recent past, the first Playstation new and exciting, and both consoles, home to most classic JRPGs, were readily available. Graphical advances gave developers a chance to tell their stories in new and exciting ways, but hadn’t become the Serious Business that they are now, prioritizing the game’s looks over most everything else. But sometime in the product cycle of the PS2, JRPGs began to crash in popularity. They’ve been floundering ever since, for one reason or another, and Final Fantasy, once the flagship of JRPGs, was no exception. We got a couple spin offs, a couple MMORPGS, and two lackluster entries buoyed up enough by what was good in them without being good enough to be classic…. and eventually, after an insane development period, along came Final Fantasy XV. Our last, best hope for JRPGs.Final Fantasy XV‘s opening is quieter than most JRPGs. We get a brief, dreamlike in media res battle sequence, and a brief sequence with the characters taking leave of the capital city… and then the game cuts to the four characters and a car that’s out of gas. Your first few moments of controlling anything in the game is pushing a car with some banter, and a cover of the classic song “Stand By Me.” It’s a crazy way to begin a game that has dudes summoning weapons out of thin air and routinely fighting gods, but it works.

In a nutshell, Final Fantasy XV is about Noctis Lucius Caelum, heir to the throne of the Kingdom of Lucis, as he journeys to another kingdom for his wedding to their princess. The set up is half bachelor party and half royal tradition; his father undertook a similar journey when he was young. Making the journey with him is Gladio, his bodyguard and trainer, Ignis, his attendant, and Prompto, a childhood friend. As things do, though, the situation falls apart– before Noctis can even get more than a day or two away from home, a rival nation invades Lucis, conquers the city, and kills Noctis’ father. The bachelor party becomes a small resistance movement as Noctis begins to make pilgrimages to the tombs of his ancestors in order to gain the power he needs to free his people. 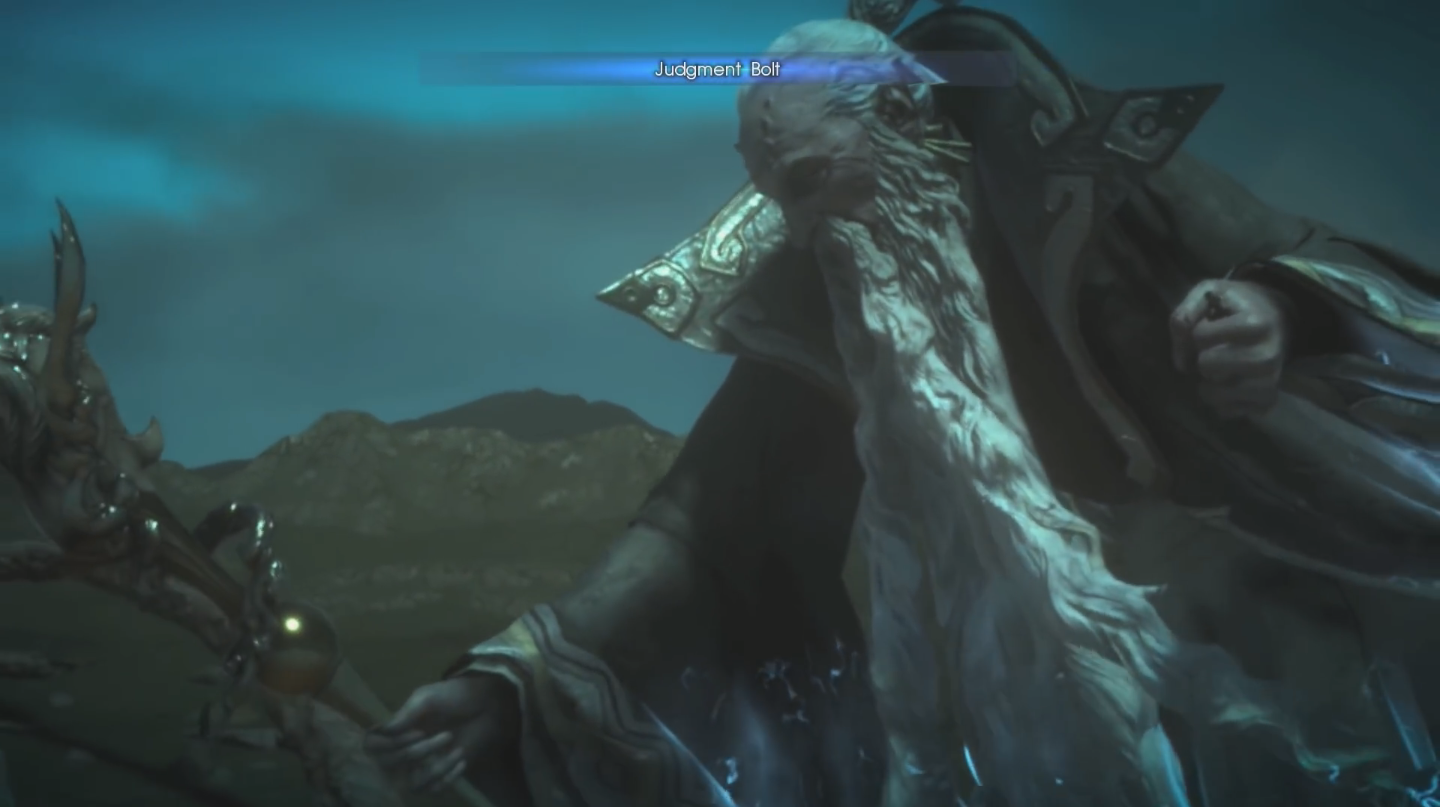 The gameplay is pretty fantastic; combat draws heavily on Kingdom Hearts (One of the rare successes after the JRPG golden age.) and is both fun and pretty as all heck. The exception there is the magic system, which reduces FF’s normal range of spells to… some mostly useless grenades and status effects. (I think I cast about 4 spells in the whole game.) Old Final Fantasy staples make their return, usually in a fairly satisfying form. (Chocobos!) Summons are infrequent and sometimes kind of difficult to pull off, but so intensely overpowered that I didn’t actually care about that. In game, they’re the elemental deities of Noctis’ world (I think….?) and they are less your servants than they are gods who deign to aid you from time to time. Animations are appropriately god-like; if you look closely at Ramuh’s left hand there, that’s Noctis clutched in it like a doll. The old coot scoops you up before slagging everything in the immediate area.

The problem that really hits Final Fantasy XV is that “I think.” Initially, FFXV keeps its narrative very close to Noctis– his entire kingdom is invaded and his father killed off screen; you hear about it when Gladio picks up the morning paper. If you watched the Kingsglaive movie that was released this summer, then you’d know what went down back in Lucius; if not, you have to make do with a few dreamlike flashes pulled from Kingsglaive. As the game progresses, what was a close and limited point of view– which I’m not technically opposed to, if done well– becomes an issue of telling the player rather than showing the player. About halfway through the game, you roll up into a town you’ve been working out of only to have a character tell you, “Oooh. By the way. There’s chaos here, because demons have infested the power plant.” A 45 second scene of someone getting a call on a radio or cell phone would’ve smoothed that out, but it gets worse as the game goes along. Major, game-changing events happen off screen. By the time you’re in the last five hours or so of the story, it’s almost become an anthology of loosely connected vignettes. “The Empire has stopped the train!” “The Empire’s attack on [censored] has caused a pile up of snow that’s stopped the train!” “Noct’s royal sword summoning magic is suddenly blocked somehow!”

In spite of all this, it somehow works. The game remains fun. The combat has something to do with that, but, at its heart, Final Fantasy XV is about its characters in a way that the games haven’t been before. (Except perhaps Final Fantasy X.) It’s about the bonds of friendship between Noctis and his companions; its about manning up accepting one’s duty and responsibilities.  Noctis and his companions are so well done that even in spite of the herky-jerky “because the narrator says so” nature of the back half of the game, it manages to tug on your heart strings. Luna, Noctis’ fiancee, is mostly a cypher, and we’re mostly told that she and Noctis love each other, despite the arranged nature of their marriage, but when their paths eventually cross, you believe it. In the late mid-game, there’s a moment that happens off-screen that changes some elements pretty drastically; the following chapter left me broken and emotionally wrung out in a way I hadn’t experienced in a long time. In the moments before the final confrontation, there’s a story beat that hit so well I shouted “yes!” at the ceiling. 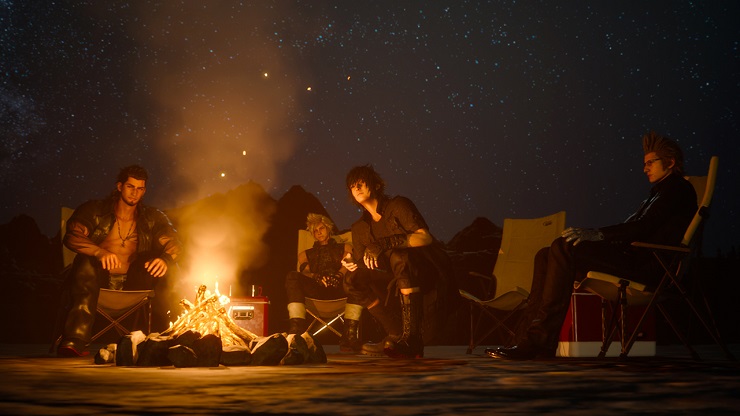 How well Final Fantasy XV works in spite of itself actually began to anger me. It reminded me, a little, of Dollhouse: if it could work that well, even in its butchered state, what would have been like if it had been given the chance to be told well? I’m convinced that a more coherent, less rushed narrative for Final Fantasy XV would’ve made the game one of the best entries the franchise has ever seen. As it is, it’s still worth playing, and I’m holding out hope that later DLC might flesh out some elements that were rushed past. I’m not even angry about the idea of paying for it– that’s how well what’s actually there works.

One last thought: The misandry of western entertainment media has been largely rebuffed in games and doesn’t seem to have hit nearly as hard in Japan as it has elsewhere, but Final Fantasy XV‘s treatment of men and our relationships is highly refreshing. Noctis and crew are all unique individuals and a web of believable relationships tying them together. (There’s a tie in anime, Brotherhood, available on YouTube, that delves into the character’s histories and how they came to befriend Noctis. ) Like The Daily Lives of Highschool Boys, Final Fantasy XV treats male friendships like a serious (if sometimes goofy) thing– and refuses to mock or shame its characters for being men. (Even Prompto.)