SUPERVERSIVE: Mumen Rider is the key to “One Punch Man” 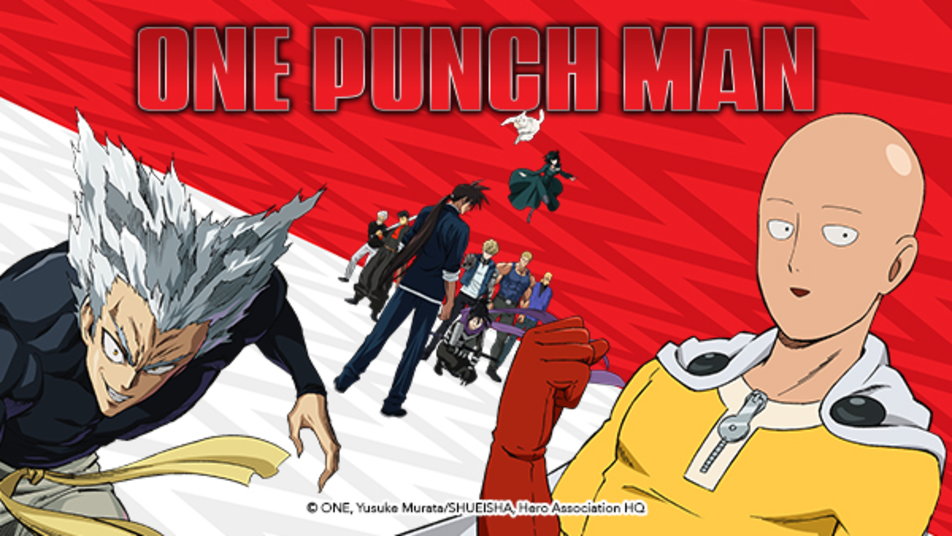 The man himself, Saitama!

I recently watched “One Punch Man”, an excellent new(ish) comedy/superhero anime that you can currently find on Netflix (though only in sub, which may matter to some people, though I still liked it). It’s a very good show, funny, clever, amazingly well animated and with an absolutely stellar soundtrack, probably my second favorite in an anime show to “Cowboy Bebop” (which I honestly can’t even imagine anyone topping). But what really stuck out to my about it was how superversive it was, against all odds.

How? “One Punch Man” is a very silly concept and regularly features heroes who are either mocked and spat on, like One Punch Man himself, or who are petty, conniving jerks more concerned with getting ahead in the hero rankings than helping people. How can it possibly be superversive? What did it do to pull off this trick?

And it hit me.

The key to “One Punch Man” is…Mumen Rider, the Cyclist for Justice!

“One Punch Man” is the story of Saitama, the titular One Punch Man. Saitama is a hero for fun in a world constantly plagued by disasters, supervillains, and monsters…and Saitama is bored with it all. You see, he has grown so powerful that he can take down any villain, no matter how strong, with a single punch, which is really no fun. Yet nobody knows who he is!

I wasn’t initially impressed by the premise, which is pretty much just a single gag, but the show hooked me in by episode 2 when we are introduced to Genos. Genos is the Watson of the show, a cyborg out for revenge against the (other) cyborg who killed his family, and after his life is saved by Saitama he moves in with him and lives as his disciple. Genos is the viewer stand-in, the only character in the show who understands exactly how powerful Saitama is. As the show goes on we are introduced to several other heroes and villains who appear poised to become regulars…one of these heroes being, yes, Mumen Rider: The Cyclist for Justice.

Mumen Rider is a C class hero, the lowest possible rank. His superpower?

He rides a bike. As in, a bicycle, not a motorbike.

It’s a good gag, to have this character exist in a world of monsters and cyborgs and supermen. But that isn’t what makes the character truly great.

The man. The myth. The legend.

What makes him so ingenious? He isn’t a gag character.

Mumen Rider transforms the show from a subversive parody to a parody as homage singlehandedly One Punch Man” fans, hear me out. When we see Mumen Rider, we don’t really make fun of him, right? We find him saving a balloon from a tree to help a little girl. He gives his sort of wimpy battle cry a couple of times, but it is earnest and sincere and he is portrayed exactly that way. The character isn’t designed to be mocked by the viewer, and he isn’t presented that way. In the absolute best episode in the series, episode 9, where he squares off against the Sea King, the scene is perhaps the most moving and powerful in the entire show – and played absolutely straight.

This is vitally important to the plot. “One Punch Man”, as I said above, portrays a world of heroes who are petty, glory-seeking, self-righteous, hypocritical, and conniving jerks, more concerned with their rankings by the Hero Association than in actually helping people. The only heroes who don’t fit this mold are Genos, who is genuinely heroic but who is notably also driven by a desire for vengeance, and Saitama, who actually is a hero because he genuinely wants to be a hero but who is spat on and disrespected by the rest of society.

Well, those two and Mumen Rider.

Mumen Rider provides the counterpoint – and he really is the only true counterpoint we see. The Sea King arc in episodes 8 and 9, 9 especially, is easily the high point of the show. I’d go as far to say that it goes on my upper tier list with “The Avengers”, “The Incredibles”, and episode 2 of “Daredevil” as one of the all-time great self-contained superhero stories ever put to screen. Not even the overall-superior “My Hero Academia” put together a two episode stretch as good. And it’s all thanks to Mumen Rider.

When Mumen Rider faces off against the Sea King in episode 9, we know he’s toast. The Sea King, a horrific looking (and he is animated in a way that looks genuinely unsettling) amphibious monster, has just laid waste to multiple powerful heroes, including Genos, who is S class – the highest class of all. And Mumen Rider is a dude on a bike! We know, absolutely know, that he simply can’t win. And Mumen Rider knows this as well. And he says so. 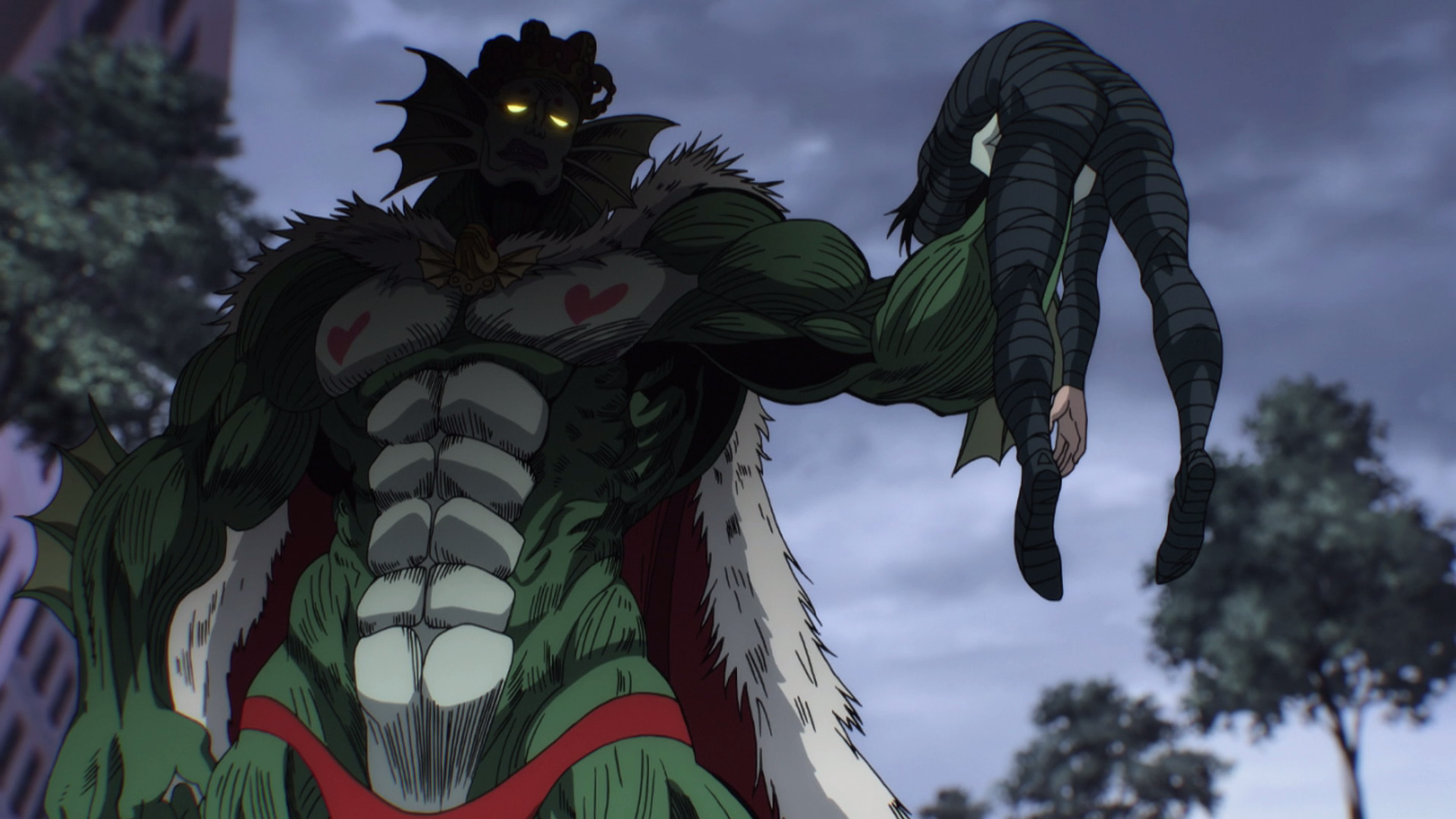 And who is that guy he’s holding?

And then…something amazing happens. First a little girl cries out that she believes in him. Then the rest of the bystanders start joining in. The cheering becomes louder, and Mumen Rider is buoyed by the support of the crowd, the soundtrack playing quietly in the background as Mumen Rider finally gets the recognition he deserves as a true hero. And then…

I won’t spoil the rest of the episode. It really needs to be experienced. From his arrival to the end of the episode things just keep getting better and better. It really is a masterpiece, and knows exactly at what moments it has to be serious and what moments it can play for comedy. It deserves to be watched more than it deserves to be dissected.

The whole point here – the point around which the whole show by necessity centers – is that in Mumen Rider, we see a true hero , and we see him treated as a true hero. This is a man who earned it. He deserves it. And those people who disrespect the other real heroes, like Saitama? They’re not the norm. Not every person who claims to be a hero is in it for themselves. There are also guys out there like Mumen Rider…guys who put themselves on the line because that’s what a hero does, and people who know that, and who love them for it.

The world really does need heroes, and the people really do gain something from them. The Mumen Riders of the world are not a joke. They’re what we should all aspire to be.

Everything that happens before that and that happens after that is entirely reframed by that character and that scene. No longer is this a mean-spirited and cynical “Deadpool”-style parody of the superhero genre. No longer is the moral of the story that heroes are chumps and the public doesn’t deserve men like Saitama. Now we know – those heroes aren’t the real heroes, and the public really can be inspired and lifted up by men like Mumen Rider. And Saitama’s actions, despite his lack of public recognition, are not the actions of a chump. They, too, are the actions of a true hero.

And without Mumen Rider, the message of the show would be entirely different. It would be repulsive, really. The show could be recommended as an amusing and technically marvelous parody, but nothing more than that. But with Mumen Rider, it becomes truly great.

And that’s why he is the most important character in the entire show.

(A note: You must remember that my grading system is very tough. If Gurren Lagann is an 8, and Cowboy Bebop is a 9, then a 7 is a very good score, and an unreserved recommendation. I want to point this out because not everybody grades as tough as I do! Which means, incidentally, that I should probably drop my Batman Ninja grade to a 7).

I leave you all with this kickass OP: