The Birth of the Pulp Revolution! 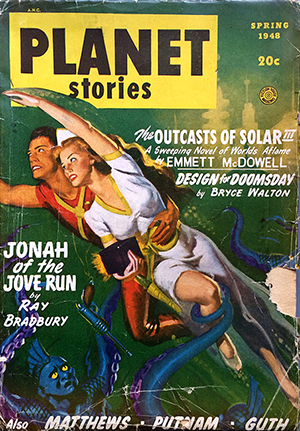 Yeah, it’s Silver Age, but that cover is PULP AS HELL.

I’m a BOMB THROWING RADICAL, known for my relentless agitation against the pieties of the moribund mainstream Fantasy & Science Fiction genre. Today, my purpose is radically different: it’s time for some larnin’.

That’s right, SCHOLAR Warpig has arrived. BRACE YOURSELVES FOR A DIRECT INJECTION OF KNOWLEDGE.

Cities are awful, ask anyone who lived in one since they first appeared circa 3500 BC. They’re crowded, stinking, and full of waste (human and non-). Food and clean water are always a problem. Then there’s the rats. (Where people gather, there’s always rats.) Crime and violence thrive in cities, along with disease.*

SO WHAT’S THE POINT?! Why not break them up, scatter the people, and cast down these infested assemblages of wood, concrete, pavement, and suffering and make everybody happier?

NOT SO FAST! Sure, disease and anomie thrive in cities, but so does trade. Trade is the lifeblood of a people, the sole yet certain route to prosperity, and robust trade requires cities. More than this, cities are required for innovation.

The masses of people living in a city allow communities of like-minded individuals to form, and innovation is driven by such groups: the philosophers of ancient Athens, Frank Lloyd Wright’s community of architects (The Prairie School) in Chicago, the emergence of Grunge music in Seattle (or Rap in New York City). The Computer Revolution began with just such a group of people at Berkeley and Palo Alto in the 60’s and 70’s. Even the (justly) maligned Futurians in New York City count.

Innovation requires a critical mass of people, a scene or community of co-interested folks who can generate ideas, share ideas, argue about them, put them into practice, succeed or fail, then refine them and try again. Which brings us to the Pulp Revolution.

There is no central city for the Pulp Revolution. We’re scattered across the United States and the world. So, like many online communities, the Pulp Rev folks use the Internet as an ersatz city, a forum for our discussions. On Twitter, Google+, and a score of individual blogs (and the good old Castalia House blog right here), Pulp Revolutionaries argue, discuss, and post historical articles, critical reviews of works (which is how this whole thing started), and even the occasional rant by bomb-throwing radicals.

Internet community building was a necessary precondition to the Pulp Revolution, but it wasn’t the only one. There is also the digital distribution of ebooks. When a Pulp Rev author pans or praises, for example, the Jirel of Joiry stories or Jack Vance’s “Planet of Adventure” or “Dying Earth” series, those who are interested can literally be downloading and reading them in a matter of minutes.

For a scene predicated on discovering and sharing forgotten works, and writing and sharing new ones, this is vital. Enough people need to have read the works that an intelligent conversation can take place, and that is only possible because of the widespread availability of e-readers and smartphones, stores like Amazon.com, the iBooks store, and others, and websites like Project Gutenberg, archive.org and SFFaudio.com.

The latter two especially, as they archive multiple individual issues of pulp magazines. Which brings us to the third precondition to the Pulp Revolution: the Public Domain.

Pulps, and F&SF in general, have a publication history that can best be described as “colorful”. Printed on the cheapest paper, intentionally disposable, the magazines began to go under when WWII and Korea drove the price of paper sky high. Even later revivals of the Pulps, like in the 1960’s under Lin Carter, found it difficult to keep the stories in print and available. Tax law changes made back catalogues of novels and anthologies too expensive to warehouse, and so many authors saw their books pulped. These authors subsequently disappeared from bookstore shelves and grocery store spinner racks.

Under copyright, these books were too expensive to keep in print, but as Public Domain works (coupled with digital distribution), it’s economically feasible for anyone who wishes to publish author compilations, themed anthologies, and more. One Amazon ebook has FIFTY-ONE Lord Dunsany tales for the grand price of nil. Nada. Zero dollars and zero cents. 25 Stories from Weird Tales? $.99. “Delphi Collected Works of Robert E. Howard“? $1.99. Public Domain makes these vanished works CHEAP to acquire, which means it’s easier than ever to revel in the works of past masters.

People asked “Why did the Pulp Revolution happen NOW?” Quite simple: it couldn’t have happened at any earlier time. The Internet, ereaders, and Public Domain collections made the material easily available, and without those people would be left digging through used bookstores and flea market longboxes for months or years, then paying through the nose, to find one single issue with one great story. And that’s if they’d even heard of works almost a century old.

I am a bomb throwing radical. But even bomb throwing Pulp Revolutionaries require a strong community and the opportunity to buy and read all this GREAT stuff. Without that, I’d never even HEARD of the Pulps, and my life would be emptier and much less exciting.

NOW GO READ SOME PULPS! They’re good for you.

* Yes, this is historically accurate. Cities really only got livable in the West during the 20th Century, after the widespread adoption of the automobile. Horses poop A LOT.