The Dead: When Making a Zombie Movie Almost Kills You 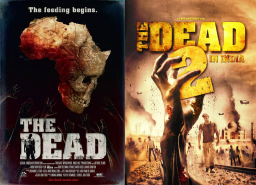 The Dead is a legitimate cinematic achievement. Shot on location in Burkina Faso, in West Africa, the twelve-week shoot saw the cast and crew face corrupt cops and officials (who demanded bribes to do their jobs and who occasionally mugged members of the production team), food poisoning, dysentery, and malaria, and the sudden death of a bureaucrat who’d authorized their filming.

The unexpected appearance of a real military unit—during a scene in which their fake military unit was shooting zombies as they drove along a road—added some extra frisson to the proceedings. Unbeknownst to them, they were shooting a few hundred feet from the President’s house, and the Military thought they were an actual invading force. Fortunately, no shots were exchanged. (A more full version of the tale can be found here.)

No one died during the shoot—except for a bureaucrat who died of a heart attack, but that had nothing to do with the movie, it was just bad timing—but sometimes it was a near-run thing. The co-director lost so much weight from dysentery, he couldn’t carry his Steadicam any more, and the lead actor was hospitalized for two weeks with malaria.

Given all the problems (so many, they even wrote a book about it), it’s amazing that they got any kind of movie out of the ordeal, much less a pretty solid entry in the genre. The Dead is about an American soldier, an engineer, in Africa (there are some references to a US military intervention in the region), who’s caught in the middle of a zombie apocalypse. The plane he’s on goes down off the coast, and he has to trek across the countryside to reach safety, dodging the walking dead all the way.

Is it a good zombie movie? Yeah, it’s pretty good. They were running on a shoestring budget, and it shows, but that isn’t necessarily bad. The performances are passable, if not perfect, and up until the end the story is fairly satisfying. Seeing two men (he picks up an African partner along the way) face the elements, the African wilderness, and the relentless zombie hordes is entertaining. This is not a big studio production, but it’s far more watchable than many modern movies, though the downer ending kills rewatchability (at least for me).

I caught both movies in the last couple of weeks, and they hold up pretty well, except for the endings. Both end on downer scenes which make the previous hour and a half spent with the main characters completely pointless. There are other resemblances—both movies are about Americans in exotic foreign locales who have to make their way across stark and forbidding countryside (that’s never appeared on screen before, in most cases), finding aid among the locales and avoiding or killing zombies along the way.

The second film was strangely similar to the first behind the scenes as well, wherein just making the movie became a hazardous endeavor all on its own, though this time for very different reasons. The second was shot on location in India—without official permission. The directors and actors relate stories of police chasing them across the Indian province of Rajasthan, arriving just barely too late to stop them from shooting desired scenes. Then there’s the hostile locals, who stabbed a director, or threw dung or stones at them and, on one memorable occasion, drop kicked a live dog into one of the brothers.

The sequel is about an American electrical engineer, assigned to keep India’s wind turbines in perfect working order, whose native girlfriend is (as he finds out in the first scene of the movie) pregnant with their baby. A zombie apocalypse breaks out (being brought in from Africa, the malady from the first movie spreading) and he’s forced to cross large swathes of the subcontinent to find and rescue his future wife. Along the way he hooks up with an orphan boy who serves as his guide to India’s back roads and watering holes.

It’s unfortunate, but the second movie wasn’t as good as the first. The callbacks to the first movie work well, the acting was better, the production values notably higher, and the story more involving, but the significant number of glaring plot holes and inconsistencies undermined the authenticity the exotic terrain lent the production. The first-time Indian actors turned in good performances, but the movie never quite jelled, and the ending threw it all away.

The two movies are NOT bad movies, at least by my standards. (Though I go to the effort of watching truly bad movies every now and then, just to re-normalize my expectations.) They have many strengths, and are better than many zombie flicks. Having been made and released before the zombie movie glut really got going, they still had something to say without recycling earlier and better movies.

Ultimately, though, the stories behind the cameras are far more interesting than what was filmed, printed, edited, and displayed. Were it not for the tale of how the directors and crew almost died, I’d likely never have watched the duology.

The movies are mostly notable for how the Ford brothers almost died making their zombie films, and that’s tragic.