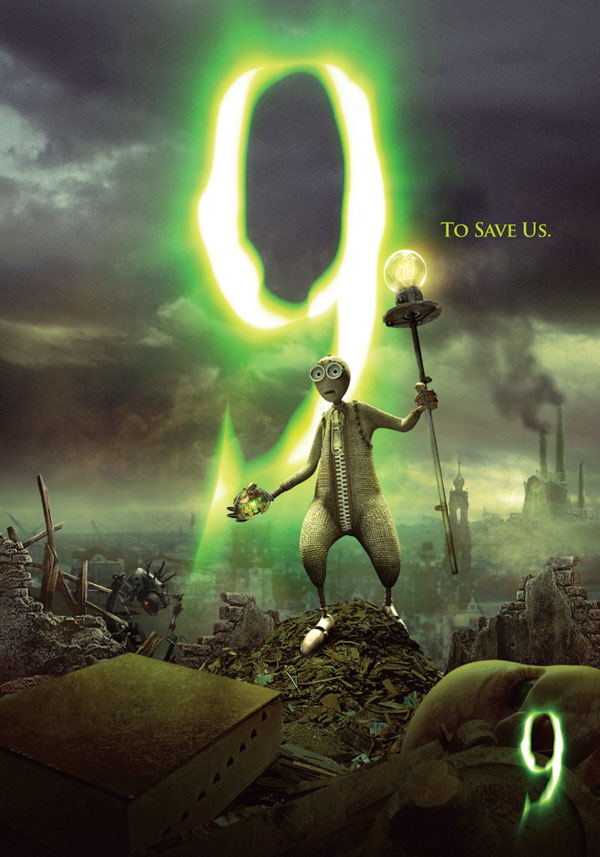 Any fanfic you can come up with would be better than this movie’s script.

I recently watched the science fiction movie 9 (2009), about a group of CGI ragdolls trying to survive in a post-apocalyptic future where all of mankind has been killed off in a war started by sentient machines.  It wasn’t good.  There is a garbage story that makes no sense, lousy characters, and a dreadful ending, all with pervasive anti-masculine and anti-Christian streaks.

But you know what is good?  The short the movie is based on from four years ago.  It distills the two elements the later full-length feature did well (animation and fights against mechanical monstrosities) into an enjoyable seven minute film.  Despite four years and a $30 million budget, the later feature added nothing of value to that humble short aside from slightly better CGI.  The subsequent story and characters only detracted from the work.

I’ve previously written why there aren’t more good science fiction movies.  One way to get around this is to take a more “pulp” approach, the exploitation movie, focusing on the action and adventure rather than any high falutin concepts.  But another would be to make a short film instead of a feature.  (Which often goes hand in hand with exploitation movies, anyways)

Why do they succeed where longer efforts fail?  Consider my earlier article about why there aren’t more good science fiction films.  Difficulty in translating the intellectual heft of the book was one problem.  However, that’s no worry with shorts.  A simpler idea can work just fine, as the work will be over by the time the audience has a chance to get tired of or seriously poke holes in it.

What about the cost and difficulty of creating a believable science fiction setting for the movie? Luckily, a short can get away with showing very little of its imaginary world.

Moreover, a science fiction short only needs a single decent concept executed well to succeed, as opposed to a bunch of them, like a feature does.  9 only had its animation going for it, but for a seven minute work, that was enough.

However, stretch out that bit of quality to 80 minutes, and it’s drowned out by generic plot and characters, as so many science fiction movies are.

Alas, short films are simply not an economically viable business model.  No one is going to pay to watch a 10 minute short.  Even a collection of such shorts is unlikely to do well, judging by the failure of horror anthologies.  They’re difficult to market and coordinate, and while a good short is easier to make than a good feature, it’s an open question whether TEN good shorts are easier than a single feature!

Still, armed with this knowledge, we at least know where to look for quality science fiction that involves moving pictures.  And we can also predict the future of the medium.  Namely, more talented, individual creators coming up with science fiction shorts on Youtube and elsewhere.