The Noisy Movie and the Quiet Movie: a Pot of Movie Gold! 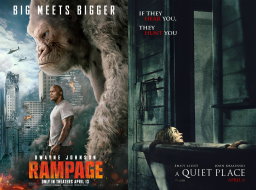 Modern movies are mostly awful. It’s rare you find even one worthy of a recommendation, and to find two? Well, that’s like winning the modern movie lottery. And to find two movies worthy of a recommend on the same day, movies that are absolutely and intrinsically opposed to each other in concept and execution, is an oddity above and beyond finding a pot of gold at the end of a rainbow: it’s an event so singular and rare, it may never have happened in human history to date, and will almost certainly never happen again.

On Friday last, I watched both Rampage, the loud, proud, Chicago-destroying epic action movie starring The Rock, and A Quiet Place, the small, intimate, post-apocalyptic tension factory starring (and directed by) John Krasinski. It’s hard to think of two movies more unlike each other, yet both were excellent examples of what they tried to be.

Rampage is about some animals who get zapped with CRISPR, and grow to immense sizes. They head towards Chicago, and begin tearing the place up. It’s an action movie. You know what to expect. And it delivers. Some people may sneer at the lack of (ahem) “REALISM!” but those people need educating on the fundamentals of story.

As I said in my “Bull**** Tax” rant, works of fiction basically get their premise “for free”. It is what it is, and you’re either down with the premise or not. If you’re not down with the premise, this work of fiction is not for you. Know that, and stay away. “Realistic” is not an all-purpose defense for a work that’s crappy, nor is “unrealistic” an all-purpose condemnation of a work that’s good.

Rampage is about giant monsters and the humans who try to fight them. It has humor, heart, characters who are well-defined enough for a giant monster movie, and was thoroughly entertaining. Cinematic snobs and critics will hate it, but then who care about the opinions of such people anyway?

A Quiet Place is a small, intimate, and very tense thriller about a family of survivors of an invasion of monsters, monsters who are almost undefeatable on a physical level, monsters who are blind and who hunt by sound. If you stay quiet, you stay safe. If you so much as speak, they hunt you, they find you, and they kill you. Period.

And then… the pregnant mother unexpectedly goes into labor.

I first read about A Quiet Place on Scriptshadow back when it was just a spec script sold to Krasinski. I found it intriguing, and I hoped the movie would live up to the hype of a pretty great script. Hint: it mostly did.

The quiet of A Quiet Place is unbelievably tense. We underestimate how important talking and yelling is, and a movie with 45 minutes of total silence, where characters speak only in sign language? Amazingly effective.

Especially because the characters are being hunted by creatures who will kill you bloody and messy if you speak. Nowhere are they safe, and (nearly) everywhere they must be quiet. “Don’t speak or you die” makes for a tense movie, a movie where dropping something means you die, where tripping and falling means you die, where you have to line footpaths with sand, so you have something soft and quiet to step on, because making loud footsteps? Means you die.

Yes, things got (as Scriptshadows’ Carson points out) a little sloppy in the second half, but the movie went so well up to that point, that the flaws are easy to overlook. The movie was tense, I was pulled in, and I found the experience both enjoyable and gut-wrenching, as a horror movie should be (but so few ever are). I was genuinely unnerved throughout most of the movie, and, being as most modern horror movies can’t wring so much as one moment of tension out of me, that makes A Quiet Place A++ in comparison.

Having watched both movies, and against all expectations, I found both of them to be immensely watchable and entertaining. Both were made to thrill and entertain, and it shows.

With a Hollywood more interested in virtue-signaling than entertaining, it’s rare to find one such movie. But to find two, on the same day?