The Phantom, Arifureta, and Ignition! 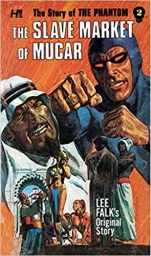 The Ghost Who Walks returns in Hermes Press’s reprinting of the Phantom’s classic novels. In the second, The Slave Markets of Mucar, the Phantom leaves his jungle stronghold for the deserts of Arabia. Prisoners have been escaping from a legendary impenetrable fortress. So when one of the Phantom’s Jungle Patrol agents investigating the prison goes missing, the Phantom must break inside, root out the corrupt officials, and trace the “escaped” prisoners before they are sold in Mucar. To stop this slavery, the Phantom dishes out two-fisted justice with the wisdom of Solomon, accompanied by his wolf, Devil.

The Slave Markets of Mucar is a straightforward adventure through exotic settings. If it seems a little quaint today, it is because our world is sedentary and unacquainted with danger. While the Phantom as a character is a contemporary of pulp heroes such as the Shadow, his novels do not rely on the lurid descriptions of the hero pulps. Instead, the novels update the classic Argosy general adventure to the pacing of the men’s adventure stories. However, the Phantom is more force than character here, as he pulls off impossible treks across the desert to appear where no man expects him. This means that The Slave Markets of Mucar is a bit scant on characterization, but the novel is a short read designed to fill a span of idle time instead of the better part of a weekend. 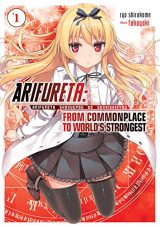 At first glance, the translated light novel Arifureta, by Ryo Shirakome, follows the well-worn tracks of the isekai otherworld genre. (English language examples of which include A Princess of Mars, The Chronicles of Narnia, and The Song of Albion.) Typically, the light novel isekai tale takes a loser, throws him into another world, and through abuse of a special skill, watches him rise in power, prestige, and responsibility until he saves the new world. Arifureta instead takes a normal guy ostracized by his classmates for the continued attentions of the class beauty, throws him into a new world, abandons him in the middle of a lethal mega-dungeon, and watches as his drive to survive turns him into a monster, physically and morally.

Like the rest of his class, Hajime is summoned to a new world to be pressed into fighting the local supreme dark lord. But when a skulking rival for the class beauty’s attention manipulates a training exercise to trap him in the nearest dungeon, Hajime is forced to munchkin his new skills to ensure his survival. It is here where Arifureta begins to lose its way, replacing the expected heroic struggle against the dark lord with that of an underdog gone rabid. Part of this is due to the kishotenketsu structure, where the familiar pattern of rising action-climax-falling action is replaced by an episodic series of cause and effect. Unmoored from any plot arc, Arifureta wanders through a series of digressions that distance the story from the expectations of the first cause and effect cycle. Unlikable characters, intrusive litRPG mechanics, failed attempts at grimdark, and the use of hoary cliches like the blonde child vampire love interest turn reading this popular translated light novel into a grind. 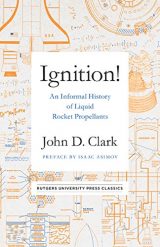 Rutgers University has finally rereleased John Drury Clark’s classic Ignition!, an informal history of the chemical rocket propulsion race that fueled the Space Race and the Cold War. Clark offers views into both American and Soviet scientific efforts, as well as his own personal research anecdotes, grouped together by chemical family. Care is taken in each chapter to explain which compounds worked, which compounds were abandoned, and which compounds blew the test bench up spectacularly. By the time readers finish Ignition!, they will understand just how chemical propulsion became a mature technology so quickly.

By this point, many of you might be asking just what such an account of dangerous chemistry has to do with science fiction. Clark was one of many scientists and engineers that wrote stories for Astounding during the heady days of 1937-1943, when the physical sciences helped propel the Campbelline Revolution to the forefront of science fiction. Like many of his contemporaries, the demands of war and the laboratory diverted Clark from writing, but he remained a fan and a friend of Campbell’s clique of writers. Isaac Asimov pens the introduction, using humor to reveal Clark’s personality–and the dangers inherent in mixing volatile and reactive chemicals.

However, the true impact of Campbell and Astounding upon Ignition! remains its readability. Clark should be recognized among the early popularizing science writers. Like Feynman in physics, Clark is able to distill the complexities of his field, chemistry, into easily understandable essentials for the layman while preserving substance for the expert. A healthy mixture of firsthand anecdote and dramatic failures elevate this analysis of chemical alternatives into an engaging account of one of the few times where chemistry held the same glamour as physics.

Those interested in following Clark’s footsteps should be aware of a key piece of safety equipment–a good pair of running shoes.