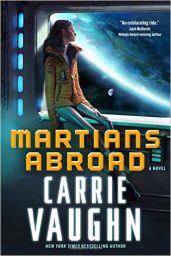 Two weeks ago I reviewed Have Space Suit—Will Travel, my first Heinlein juvenile.  I bought, picked it, and read it a bit ago.  The review wound up being very well timed.  A YA book imitating the Heinlein juveniles was released on January 17—Martians Abroad by Carrie Vaughn.

I read a longish blog post a couple weeks ago responding to Martians Abroad by questioning why modern authors, even when they self-consciously try, can’t pull off imitating Heinlein’s juveniles.  Three reasons come to mind.  One, the market is much different.  Publishers pretty much won’t market anything as YA without a romance.  And they’ve pretty much abandoned boys to video games.  Two, the authors aren’t willing to commit to the straightforward and traditional morals that underlie the tale.  Three, they don’t have Heinlein’s talent.  There’s the rub for the #pulprevolution.  What good is it recognizing the genius of Leigh Brackett or Jack Vance without genius of your own?  (Warning: does not apply to Schuyler Hernstrom.)

Rather than a straight up review I will focus on comparing it against what I thought made Have Space Suit—Will Travel so special.  A quick synopsis of the plot: Polly and her twin brother grew up on Mars, but they are shipped off by their mother to an exclusive boarding school on Earth.  In addition to the usual school politics, mysterious accidents begin to befall Polly’s classmates.

Have Space Suit—Will Travel is utterly devoid of any romance.  But the conventional wisdom seems to be that you can’t sell YA, i.e., books to girls, unless you include some romance, preferably a love triangle.  And girls, unlike everyone else, still buy books.  Here, more than anywhere else, Martians Abroad may be caught between its desire to imitate and the modern YA market.  Two potential love interests are floated, but nothing much ever comes of it.  I’m not sure if I should be thankful of that, or irritated that valuable page space is wasted. 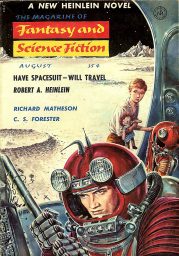 Hard science fiction has been getting a bad rap in these pages here lately.  But Have Space Suit—Will Travel is a perfect example of how science can make a set piece work.  If Heinlein doesn’t take his science (really, his engineering) seriously, then we don’t get two gripping space suit walks.  Martians Abroad isn’t exactly dismissive of the science.  The references to the Mars colony all make sense, and the difference in gravity between Mars and Earth is a big deal to Polly.  But she’s at a school that could be any number of boarding schools that exist on Earth right now.  There are three action sequences.  The first isn’t science fictional at all.  The second hinges on the worst sort of Hollywood hacking.  The third is by far the most science fictional, and the best, but Vaughn hadn’t laid the groundwork to make it truly gripping.

How to deal with parents is a basic problem for YA fiction.  Growing up, after all, is about getting by on your own.  Still, the difference between Heinlein and Vaughn is marked.  Kip’s dad in Have Space Suit—Will Travel might come off to modern eyes as downright neglectful, but this was pre-helicopter parents.  Once he realizes his mistake in failing to monitor Kip’s school, he rectifies it…by giving Kip the tools to teach himself.  Even when Kip is in space, the Mother Thing serves as, well, a mother figure.  And the book ends with Kip having earned the respect of men.  Polly, on the other hand, has no father.  She’s literally a test tube baby.  Her mother appears in the opening pages and promptly ships her off to Earth.  Polly smarts off to pretty much every adult she meets—probably because she never had a proper male role model at home—but it’s hard to criticize her for it when pretty much every adult who appears is a heel.  And—SPOILERS—the villain of the book is revealed at the end as Polly’s mother.  Martians Abroad ends with Polly rejecting all of the adults in her life.

But the biggest difference is a matter of protagonist agency.  Kip decides he wants to go to the Moon.  His dad says, “sure, go ahead.”  How?  That’s Kip’s problem.  He devotes himself to a serious course of study.  He hawks soap and writes endless taglines for a shot at a promotional trip.  When he gets the second prize of a used space suit, he painstakingly gets it space ready.  He starts to get caught up in the events of the plot after that, but he is always ready to take action.  Polly, on the other hand, is reactive.  She is sent to Earth by motherly diktat.  Once there, her actions are mostly in reaction to her classmates.  We’re told that she wants to be a pilot, but she doesn’t appear to have given thought to the steps in between where she is at the beginning of the story and actually becoming a pilot.

H.P. is an academic, attorney, and author (well, blogger) who will read and write about anything interesting he finds in the used bookstore wherever he happens to be for the moment.  He can be found on Twitter @tuesdayreviews and at Every Day Should Be Tuesday.