TIME TO SHAKE THE PILLARS OF HEAVEN! 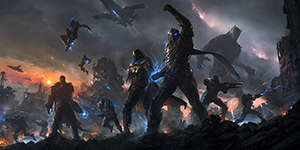 SHAKE THE PILLARS OF HEAVEN!

It is a great day, a glorious day, a day for Daddy Warpig to once again SHAKE THE PILLARS OF HEAVEN!

Everything you know about “Genre” is wrong.

Okay, maybe not you. You’re an unusually intelligent and attractive individual, who has risen above the petty restrictions which bedevil lesser minds. But those other guys—PHEW!—do they need to be set straight:

“Genre” does not exist.

Hold your horses! Before you do a spit-take and ruin another good monitor, let me explain.

“Genres” were created by bookstores and publishers as a set of vaguely-defined categories that grouped similar works together, so the audience could find books kinda sorta somewhat like those they already enjoyed. In the beginning, genres didn’t even exist.

“[B]ack when H. G. Wells, Jules Verne, A. Merritt, H. Rider Haggard, and others were inventing the genre of science fiction, their novels were published and displayed right alongside [non-fantastic] contemporaries like James, Dreiser, Woolf, and Conrad.”—Orson Scott Card

In those days, there was no difference between fantastic tales of magic and technology, and every other kind of book. Books were just books. “Genre” came later, to help sell books.

What “genre” is not, and was never intended to be, is a system of perfectly precise categories into which any and every book can be placed without any difficulty. It simply cannot do the job—works are too varied, too disparate for any system to exactly categorize them. “Genre”, in this sense, DOES NOT EXIST.

Yet, at the end of the Golden Age of Fantasy and Science Fiction, a Great Wall was erected between F and SF, and upon its completion a Great Decree issued:

FANTASY AND SCIENCE FICTION SHALL BE UTTERLY SEPARATE FROM ONE ANOTHER, FOR NOW AND FOREVERMORE. NO MAGIC IN SF. NO HIGH TECHNOLOGY IN FANTASY. SO LET IT BE WRITTEN. SO LET IT BE DONE.

And the decree became holy writ, and in time people forgot there had ever been an era in which the two had been one.

Yet, what distinguishes an SF story from a Fantasy tale? There is no precise and perfect delineation. Sometimes a story is clearly SF, more often SF includes rubber physics and impossible technologies to make the story work and to make the setting cool. Sometimes a story is clearly magical, but it turns out to be set not in medieval times, but in the far future on a planet colonized by humans, and the “magic” is really psionics or nanotechnology. Robert E. Howard often mixed alien races, magic, tropes from Westerns, and horror—all in the same story.

Orson Scott Card, again: “If you have people do some magic, impossible thing by stroking a talisman or praying to a tree, it’s fantasy; if they do the same thing by pressing a button or climbing inside a machine, it’s science fiction.”

If doing the exact same thing via a tree versus a machine is the dividing line, the differences are merely a matter of props, costuming, and scenery. Steampunk, for example, is all about Victoriana with gears and goggles. Urban Fantasy is about magic (prop), magical races (costuming), and the modern world (scenery); Cyberpunk about metal limbs (props), mirrorshades (costuming), and the Matrix (scenery for a high-tech dungeon crawl, complete with wandering monsters and treasure chests). Change the props, costumes, and scenery, but leave the story the same, and the genre changes.

Card: “Most science fiction novels could easily be turned into fantasy by changing starships back into ocean-going vessels. Frank Herbert’s Dune would fit right in with the best medieval romances, if planets became continents and the spice became a source of magical power instead of a drug necessary for space navigation.”

Yes, F&SF should include mind-blowing technologies, fascinating magical systems, or other cool ideas that can be interwoven with these trappings. But “genre” is determined by the trappings, not what ideas are present or how accurate they are, nor how rigorously the consequences of them are extrapolated.

All of these Card quotes, by the by, come from the same source: Card’s How to Write Science Fiction and Fantasy, literally the manual on how to write stories in the F&SF genre. This is the same manual that says “You must be aware of the boundaries [between F and SF] … but you are not their prisoner.”

YOU ARE NOT THEIR PRISONER.

So burn the Great Decree—”NO MAGIC IN SF. NO HIGH TECHNOLOGY IN FANTASY.” Burn it, defile it, shred it, repudiate it.

Write what you want to write. Make it as awesome as you can. And go out and find your audience AND SHAKE THE PILLARS OF HEAVEN.