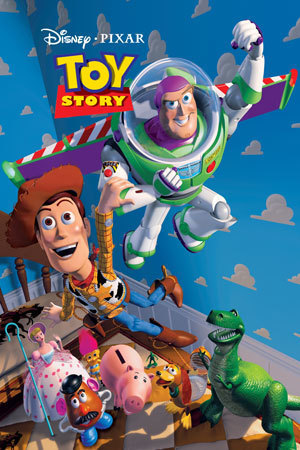 “Oh no, Daddy Warpig,” people say to me, “Why are you so mean? Why do you have to tear down things other people love? Why don’t you say something NICE for a change?”

Never let it be said that I am loath to answer a fan’s request. So, to brighten the hearts of millions of people across the globe, let us discuss one of the greatest works of imaginative fiction ever made:

Pixar was a failed division of LucasFilms, spun off into its own company where it become a failed computer hardware manufacturer. Bought out by Steve Jobs, himself recently ousted from Apple (the company he’d started in his garage and built into the engine of innovation driving the computer industry), the ex-CEO, along with the staff of the failing computer manufacturer, began desperately thrashing about for something Pixar could do to make money. Sales of its 3-D animation machines were cratering, so to generate buzz and sales they began showing John Lasseter’s CGI shorts at industry trade shows like SIGGRAPH. This lead to contracts to produce CGI commercials, which lead to a contract with Disney to make a CGI feature length film. This was the last chance for Pixar: if Toy Story failed, or was cancelled by Disney (which their one-sided contract allowed Disney to do if Steve Jobs so much as sneezed wrong during a meeting), the company was through, and Jobs out his $50 million investment.

Toy Story did not fail. It made $361 million worldwide, securing Pixar’s future, allowing them to continue to make landmark movie after landmark movie (with a few clunkers here and there).

Toy Story succeeded because it was a touching story. A kid, his beloved toys, and the toys’ desperate desire to fulfill their purpose in life (bringing joy to their child) drove the story of a favorite toy supplanted by a rival, and an attempt to get his owner’s attention that goes wildly wrong. Tom Hanks (Joe Versus the Volcano) and Tim Allen (The Santa Clause 3: The Escape Clause) not only voice their characters to perfection, they also have a “Buddy Cop” chemistry that just makes the movie work. The villainous Sid, who exults in tearing toys apart and blowing toys up, is cheerfully vicious (hey, wait a minute…) and ably provides the impetus for the two rivals to work together to save themselves and all the other toys terrorized by Sid.

There is a deep truth to the movie, unremarked on by the script and most commenters: the role that total devotion and love unfeigned has in shaping character. The toys live for their owner. As Woody puts it at the beginning of the movie, “It doesn’t matter how much we’re played with—what matters is that we’re here for Andy when he needs us.” As toys, they exist to bring their owner joy.

Woody himself struggles with this. When Buzz usurps his place as Andy’s favorite toy, he grows progressively more covetous of the attention paid to Buzz until he plots to knock Buzz from his perch (literally), stealing for himself a moment of time with the owner who had, for the moment, turned to someone else. At that moment, Woody was supremely selfish. It wasn’t about Andy’s needs, only his own. When his scheme spectacularly backfired, Woody was forced to humble himself, confront his own failings, and forgive the usurper (who had, in truth, done nothing to wrong Woody). Once free of jealousy and envy, only then could he team up with Buzz and Sid’s torn-up toys to defeat Sid and return to Andy.

The movie is a master-class on how to build a story off fundamental and eternal truths. It never preaches, it’s never topical or relevant. It simply is: envy leads to coveting leads to lashing out leads to danger leads to humility leads to redemption. It’s a perfect moral arc, simply present and wholly uncommented-on. On the back of this perfect moral arc, the Pixar “brain trust” built a perfect story arc.

Early in the production of the film Disney executive Jeffrey Katzenberg pushed Pixar to make the movie darker and edgier. What resulted was an absolute debacle which no one was happy with. Only when they eschewed dark and edgy, and embraced simple and sincere, did the movie resolve into something of great worth. (Pixar learned the lesson well: witness the beginning sequence of Up, as heart-wrenching a tale of love and loss as ever was told.)

Toy Story was an instant classic, not for its technological achievements (which were many and impressive), but for the simple and touching story at the heart of the movie. It’s a beautiful story, and a beautiful movie, and though the technology noticeably lags when compared to more modern CG movies, the story of Woody and Buzz never will.