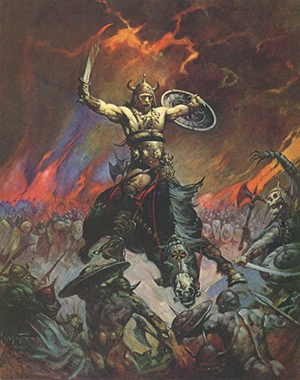 No Conan the Barbarian.

Suppose, at one point in time, Hollywood suddenly decided that the only fiction movies worth making were fictional documentaries—documentaries about events that never occurred. A little license was granted in what fictional events could be at the core, but after that ONLY STRICT REALISM. In specific, Action Movies were ABSOLUTELY VERBOTEN.

And this decision was rigidly enforced by Studio Executives, and anyone who didn’t want to make fictional documentaries could never be involved in the movie industry ever again. And then rafts of directors, actors, screenwriters and such were fired, driven out of the business forever.

In this world, terrorists taking over a still-under-construction office tower in LA would be strictly and only about real FBI tactics and personalities, and plausible terrorist motives and actions. It specifically would NEVER be Die Hard.

No Die Hard. No Jaws. No Splash. No Brewster’s Millions. No Star Wars. No Indiana Jones.

Imagine how creatively bankrupt that Hollywood would be. Imagine all the movies that you’ve personally seen, that would be either massively altered or totally banned. Imagine how impoverished our culture would be.

Audiences would flee by the millions. Movies would become a tiny, obscure, niche entertainment, the domain of hardcore cinephiles in tiny clubs that always struggled and frequently went out of business. TV and radio would be king. They would dwarf movies in popularity and imaginativeness.

THIS IS EXACTLY WHAT HAPPENED TO FANTASY & SCIENCE FICTION.

Criticism about the Silver Age isn’t about “Is TV better than movies?” or even “Should fictional documentaries even exist?”

It’s about “WHY DID MOVIES BAN ALL ACTION, HEROICS, AND ADVENTURE? WHY DID THEY THROW AWAY ALL THIS STUFF PEOPLE LOVED? WHAT KIND OF MOVIES COULD WE HAVE HAD IF HOLLYWOOD HADN’T LOST THEIR DAMN MINDS?”

Imagine taking a person from that world, and showing him Jaws or Star Wars or Die Hard. Imagine his jaw dropping, imagine his mind being blown. “I never KNEW movies could do this!”

THIS IS EXACTLY WHAT JEFFRO’S APPENDIX N DID. That’s why “being Jeffroed” is even a thing.

I’m not saying Blue SF is bad, or that it should be banned. I’m saying the Silver Age was an extinction level event for Fantasy & Science Fiction, a meteor impact that killed off 99% of the genre. It deprived us of DECADES of material. Who knows how good it could have been? Who knows what books and stories were aborted, decades before they would even have been written?

The Pulp Revolution wants to restore all that. You can have your Blue SF—no one is trying to take it away. You can even write new Blue SF. None of us care.

But over here, this mad band of rebels is trying to Jurassic Park new Pulp into existence.

Because we’re not SATISFIED with fictional documentaries. We want Action Movies and comedies and space opera and cliffhanger serials and… and… and…

In the Silver Age, Fantasy & Science Fiction LOST ITS DAMN MIND. We’re just trying to put it back.