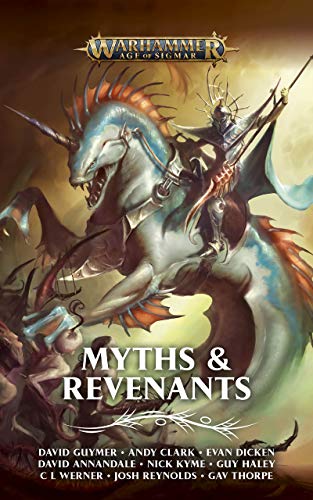 Gaming tie-in fiction is something I had actively avoided for years. I read the anthology Realms of Valor (1993) set in the Forgotten Realms universe which I thought was overall bad. I thought the R. A. Salvatore story much better than the other fiction. As a result, I just avoided gaming tie-in fiction. I never got into playing RPG which is probably an inducement to read this sort of fiction.

The Warhammer universe caught my attention in a round about way. I have been reading some good fiction by C. L. Werner and William King in Tales From the Magician’s Skull. Looking at their bibliographies at the internet speculative fiction data base, I noted that both wrote a lot of fiction set in the Warhammer universe. Some of the writers in the Legends anthologies have also written for Warhammer.

I always like reading an anthology to get a feel for a new writer. If I like a story, I will check out more. The local Barnes & Noble had Myths & Revenants. Something I note about the Warhammer books is they still have cover art the way books used to be thirty or more years ago. The cover for Myths & Revenants is by Lewis Jones.

The description on the back cover states:

“Harrowed by unending wars, few bastions of safety remain in the Age of Sigmar. Even so, the brave – or perhaps foolish – set out to plunder the shadowy corners of the lands. But what terrible curiosity would drive someone to explore the myths of the Mortal Realms? Spoken of only in whispers, it is said that graceful beings come at high tide seeking their due, raiding without provocation. While in Shyish, corpses and kings wander the afterlife, searching for the revenants of lost lovers. And across the flame-scarred plains of Aqshy, dauntless Fyreslayers hunt for any remnant of their lost god. No matter their goal, trials beyond endurance are all that await the intrepid.”

Now, I have no idea of what the Age of Sigmar is. I went to the ever useful Infogalactic.com which gave me this description:

“Following the destruction of the Warhammer World by the forces of Chaos, Sigmar floated through outer space, clinging to the core of the Old world. He eventually met a space dragon called Dracothion, and they became good friends. Dracothion let Sigmar ride him, and showed him the way to nine new realms, each a representation of a magical “wind” emphasising some element like fire or light or life – as well as the later, unilateral addition of Chaos by the Chaos Gods – which are connected by magical portals called realmgates. Souls were drawn to these realms, some being survivors from the previous world, some new, or were sought out by Sigmar. Sigmar forged an alliance amongst these peoples and their gods (his former acquaintances from the old world) as civilisations were re-established. Following an attack by the Forces of Chaos which captured most of the realms the alliance broke down and the civilisations were almost totally destroyed before Khorne and his forces turned upon the rest of the Chaos armies. Sigmar decided to create the mightiest warriors ever, the Stormcast Eternals. Armed with mighty storm weapons, the Stormcast led the fight back against Chaos. The Age of Sigmar begins many, many generations after this with Sigmar attempting to re-establish the former alliances and purge the world of Chaos once and for all.

As in the lore, there are present souls who survived the End Times and have wandered through space, nearly all races from the WFB game and even individual characters noted as having died in the End Times, are eligible for play.”

These stories are either novelettes or close to it in length. The Age of Sigmar world is  sort of boiler plate fantasy. I see a lot of Michael Moorcock, Tolkien, a little Lovecraft, Burroughsian sword & planet with the airships and magic enhanced pistols. The prose does the job, no precious writing style present. Some stories had a strong sense of horror. Elves are aelfes, dwarves are Duardin etc. The names are changed to protect the innocent.

Industrial fiction of this sort serves a purpose. Sword & sorcery fiction prospers when there is enough of a market to allow young new writers to become proficient whether Robert E. Howard in Weird Tales or Michael Moorcock in Science Fantasy. The William Kings, Gav Thorpes, and C. L. Werners can ascend to master fiction writers with their own worlds after first serving an apprenticeship in a gaming universe. It is also convenient to have dependable fiction to grab when on vacation.