Before the Pulp Revolution: The Mountain Who Writes! 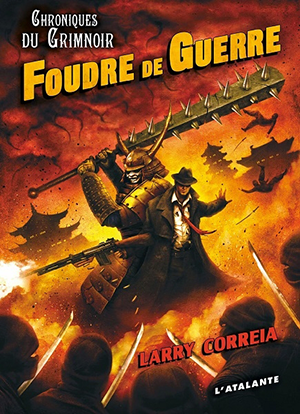 A super-powered samurai and a secret agent fighting ninjas with magic. Your argument is invalid.

There are two kinds of people in the world: the desperately lonely and benighted souls who drift through life unsatisfied and unhappy, and those who read Larry Correia.

Larry isn’t part of the Pulp Revolution, and I’d bet money he’s never heard of Cirsova magazine (or even Appendix N), but his writing definitely prefigured the Pulp explosion. Larry’s books are purest Pulp, and for that he deserves a place of honor in the Pulp Revolution Hall of Fame.

2 Moral Core: Pulp Heroes, as Misha Burnett wrote, act from a moral core. In Larry’s stories, even the VILLAINS act from comprehensive moral codes (see Hard Magic and Son of the Black Sword). Owen Pitt, chief protagonist of the “Monster Hunter” series, has a definite moral code which compels him to act, and the element of romance, in both the “male-female” and “adventure” senses, are clearly a part of that series.

3 Deafness to Genre Restrictions: It’s not that Larry consciously rebels against arbitrary genre restrictions. It’s that he genuinely doesn’t understand them and violates them as a matter of course. Like a caveman with a pocket calculator, The Big Book Of Genre No-No’s befuddles him, so he beats the infuriating thing against a rock until shiny stuff falls out. Then he takes the shiny stuff and makes something cool.

It’s telling that when Larry set his hand to writing Epic Fantasy, what he came up with was, first, a dieselpunk-superhero-fantasy with zeppelins, ninjas, and giant mechs—a genre blend that does the pulps proud—and second a post-demon-apocalypse, India-inspired sword and sorcery setting, every bit as exotic as anything you could find in the Pulps. BOTH are high-energy and high-adventure, both feature action and heroics, and neither are 300,000 word turgid tomes of exposition and boredom.

There comes a time in every literary movement when earlier works are reinterpreted in light of the new aesthetic and retroactively incorporated. It happened with New Wave, with Cyberpunk, and with Steampunk, and I’m doing it with the Pulp Revolution. Larry can consider himself retroactively drafted into the ranks of Red F&SF.