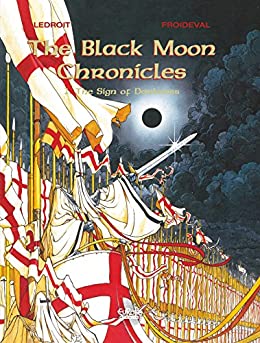 God might not play dice with the universe, but the devils do.

In The Black Moon Chronicles: The Sign of Darkness, written by François Marcela-Froideval and drawn by Olivier Ledroit, Lucifer grows tired of his generals throwing matches in their little games. So he engineers a game in the mortal world where none of the players can deliberately lose. A Chosen One prophecy and the fall of an empire would do nicely. But what man will be chosen?

He might be a nameless lancer out in the woods, little more than a highwayman in armor. Call him Wismerhill after his home town, or Wis for short. It’s as good a name as any. But this half elf has an unknown past and hints of more sinister gifts, as the rogue Heads-or-Tails discovers in their first meeting. Wis may be sheltered and naive, but he falls into bad company with the mercurial rogue, whose personality shifts based on which of two magical swords, good or evil, he currently wields. The two fast friends embark on a series of petty crimes and capers. But the eye of the half-ogre Gorghor Bey soon settles upon Heads-or-Tails’ swords.

The swords, however, are attached to Heads-or-Tails, and it is only by the whim of Gorghor Bey that the two highwaymen keep their heads. Now fighters for the half ogre warlord, Wismerhill and Heads-or-Tails join the Gorghor Bey’s invasion of the Empire. Caught up in a whirlwind of fighting, training, and loving, Wis quickly distinguishes himself as a valued aide, able to read the winds and save the horde from multiple ambushes as they raze the hinterlands of the Empire. But such a display of military power cannot go unchecked, so the Empire sends the Army of Light after Gorghor Bey. And other, more sinister forces have taken notice of the chaos for their own ends. 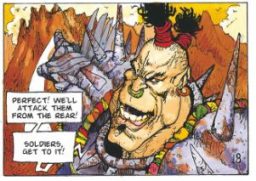 The Sign of Darkness serves as the ever-popular origin story for the twenty volume Black Moon Chronicles. This French dark fantasy series has given birth to two spin-off series and even a video game. The emphasis here is on dark fantasy, if the slight elven warrior with an evil magical sword was not a clue. Wis is fighting on the side of orcs, ogres, and barbarians against the setting’s version of Gondor, and there is no mistaking these invaders for the side of Good. At best, Wis and his companions act as anti-heroes who are a little too comfortable with the terrible acts they commit. But those acts are in the future. The Sign of Darkness is comics’ answer to The 36th Chamber of Shaolin, an extending training montage pushing Wis from a nameless tough to a champion on the run. He has yet to be swept up into the various gambits playing out for control over the Empire.

The setting is familiar, with a gleaming white Empire as the bastion of church and civilization standing against a tide of invading barbarism. This time, we see it from the invaders’ point of view, without the expected propaganda of imperial hypocrisies that a contemporary version of the story would demand. Some people just want to watch the world burn. Those willing to light the match fight for Gorghor Bey. The resulting chaotic, orkish invasion is so familiar, as are Wis’s winds of magic, that it would not be a surprise to discover that Games Workshop plundered the Black Moon Chronicles as they did The Lord of the Rings for their Warhammer Fantasy setting. As of yet, the Black Moon Chronicles does not revel in the destruction and cruelty to the same degree that a grim dark world where there is only war has, or with the exquisite artistry of a Melniboné. Instead, a strong dose of self-deprecating humor keeps the excesses away. 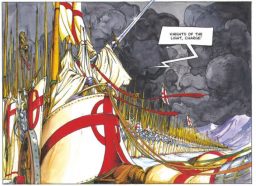 The Black Moon Chronicles uses an interesting design choice. Those characters and objects which are evil, or, in the case of Wis’s powers, chaotic, have rougher, dingier, uglier art. Clean lines and beauty are reserved for the good, whether that be the Army of Light or Feidreiva, Wis’s unlikely lover who spends less time clothed than French fanservice favorite Laureline. And as Gorghor Bey changes from Wis’s captor to mentor, his portrait smooths. But the real star of the artistic show are the big battle set pieces. Ledroit conveys in his art both the immense scale of massive armies as well as the immense chaos of battle. The only portrayal that comes close is The Return of the King‘s field battles.

I am intrigued by the potential in The Black Moon Chronicles: The Sign of Darkness. It is just the opening act, and the villains and main conflict of the story have yet to be revealed. Fortunately, the full 20 volume series is offered on Kindle Unlimited, making it easy and affordable to follow along Wismerhill’s journey under the Black Moon.