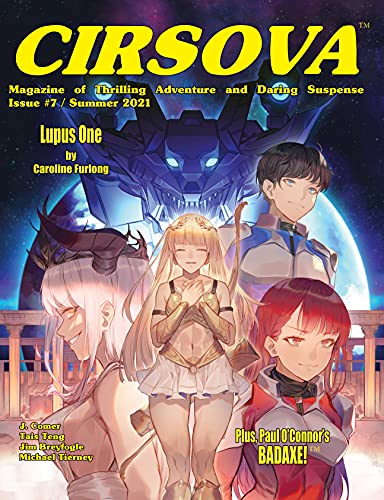 A new season brings a new edition of adventure magazine Cirsova, complete with unknown stars, feats of heroism, and quick-paced twists worth of the classic Argosy magazine. Continuing the direction set down by its fifth anniversary, the Summer volume presents a mix of old favorites and new stars, with an eye for longer tales this time. Also, the experiments with illustrations return, with work from Mongoose and Meerkat illustrator Dark Filly and newcomer UsanekoRin gracing the pages. And anchoring the volume is the second issue of the 1980s-era indie comic, Badaxe.

Cirsova’s Summer 2021 volume opens with the second part of Michael Tierney’s The Artomique Paradigm, the latest of his Wild Stars adventures. Wild Stars is a long and vast setting, previously told in comics. And while it takes a while for newcomers to move past the setting shock, this second set of chapters settles into a wild dash across a pirate planet. The locales are ambitious and pulpy, setting a backdrop for a plot that movies at the speed of Max Brand’s historic adventures. An internal logic to the gleefully over-the-top names reveals itself through quick asides between the inevitable setbacks and betrayals. This portion of The Artomique Paradigm ends with a masterful cliffhanger. While we are promised the conclusion in the next volume, that conclusion is still three months away.

Caroline Furlong’s “Lupus One” is a joyous homage to classic 20th century anime, filled with mecha, monsters, gods, and alternate universes. And it is a pleasure to read something influenced by anime and manga without it becoming a mere Xerox of the original medium. No reluctant and depressed mecha pilots here. “Lupus One” transplants a class primary world fantasy like many of those found in Weird Tales, where the main character stumbles into a lost and almost legendary weirdness, into the futuristic setting of the moon. While “Lupus One” is self-contained and hints at a happy ending, plenty of hooks exist for continuation, which I hope Furlong will explore in the future. And, in a masterful stroke of editing, “Lupus One” also bridges the science fiction settings of the Moon and the Wild Stars to the fantasy worlds in the stories that follow.

Tais Teng’s “His Amber Eyes, His Pointed Smile” is a Central Asian-flavored revenge story, as little Iskander grows up wanting to avenge his mother’s abandonment by his father. Yet the path of revenge is also the path of following in his father’s footsteps. It is an earthy chinoiserie, and almost a warning how pleasures can corrupt, wrapped up in a fairy-tale.

J. Comer’s “Sky Machine” follows the fate of the healer Sorana and her Roman compatriots as they are captured by a Scandinavian tribe. With certain death awaiting them, the Romans hatch a scheme for escape, one dependent upon the observations of the great “sky machine” of the heavens above them. It’s a more straightforward tale than the previous ones, but executed well, and the slight accent given to familiar names adds a touch of the exotic to the otherwise familiar Roman and Norse setting.

Kat and Mangos return in Jim Breyfogle’s “The King’s Game”. This time, the Mongoose and Meerkat are out seeking information. The best place for that may well be in the Regum Arena, playing an enchanted game similar to chess but only played by the rich and the powerful. Mangos’ sword is on the line, for not only must he play against the assembled worthies, he must play against the Meerkat herself. Breyfogle continues to mix exotic locales and unique plots for the Mongoose and Meerkat, forcing his characters to rely on their wits as much and even more so than the flashing of blades. And while Mangos is slowly gaining wisdom to match his formidable swordarm, the mysterious Kat shines again with her schemes.

Paul O’Connor’s Badaxe rounds out the Summer volume with an intervention by and an escape from the dread god Badaxe. Layers of obfuscation slowly peel away, leaving one to wonder how the all too female Tanree’s destiny will tie into the prophecy of the boy who will kill Badaxe. New players enter the game, ready for a final confrontation in the next volume.

Cirsova also offers a preview of Jim Breyfogles upcoming The Paths of Cormanor, soon to be accepting pre-orders on Kickstarter. As editor P. Alexander says:

Inspired by eastern European and Scandinavian fairytales, The Paths of Cormanor is the story of a beautiful young woman (who can turn into a cormorant), a handsome prince (who’s the seventh son of a seventh son), and more than a handful of dreadful monsters.

All in all, the Summer 2021 edition is a worthy addition to the long-running string of excellence readers have come to expect from Cirsova.