So WHO Killed Science Fiction? 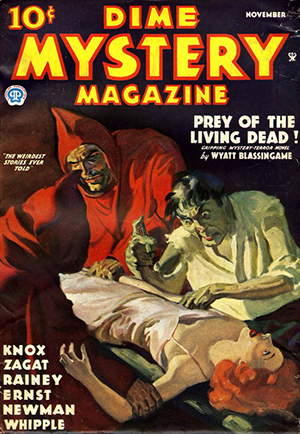 “Ah, Science Fiction, we have you now!”

Welcome back, true believers! It’s time for Part Two of my magnum opus! Doctor Warpig is in the house, and it’s time to play Diagnose that Disease! Let’s start with eradicating some fuzzy wishful thinking.

Fact is, people read—if you give them something they consider worth reading.

Sure, books might have it tougher what with all the moving pictures and wireless television sets and home game arcade video machines, but once again I refer you to the sales chart. Even if the absolute number of readers has declined, Science Fiction is losing the competition for those readers. It’s the bottom of the heap.

Boring, stodgy, impossible to read “LITERARY” works outsell the genre of imagination, excitement, and the future. Hell’s sakes, people, that’s a problem. Quibbling about what you think are minute flaws in the argument won’t change that fact.

It also doesn’t help when SF bookshelves—real or virtual—are inundated with audience-repelling crap. And they are, and have been for a long time. And I don’t mean badly plotted or poorly written books. I mean absolute garbage written with skill and talent, that also happens to drive away the audience.

What exactly does The Doctor mean by “crap”?

We can start with boring “realist” Sci-Fi (seriously, read the linked article), pass through stories that outright insult the mainstream (including Christians, Conservatives, and normies), and finish up with the perverse or offensive. A vignette passed to me on the Facebooks:

“I can even name the sledgehammer-angry-feminism story that spurred me to drop my Asimov’s subscription because it was just simply becoming pointless for classic-style SFF… in 1988.

“That story was ‘BOOBS’ by Suzy McKee Charnas, about a girl who hits puberty, grows boobs, gets teased about them, turns into a werewolf and kills and eats her tormenters.

In the middle of a cool little short story about the end of the world, an explicit sex scene. Because mainstream audiences LOVE reading Science Fiction magazines / anthologies filled with random, unnecessary explicit intercourse.

Heinlein wrote scenes of [family members getting way too close]. Then the same again, plus cannibalism. Not to mention group marriages, group sex, and a host of other skeevy stuff.

Golly gee willikers, I wonder why normies don’t buy the SF magazines or anthologies? The mystery is so dark and impenetrable. How ever can we explain why the audience just went away?

Look, folks, you can write whatever you want. But if you set out to offend normies (or bore or insult them), then normies won’t buy your books. Or, after a while, anybody else’s—it’s too difficult to pick through the boring, offensive, or insulting stories to find the gems. Crap damages the market for everybody. And once the public’s preferences change, it’s really difficult to change them back.

For DECADES, Science Fiction has been churning out boring, perverted, or condescending books and stories by the truckload (hell’s sakes, look at the Hugos recently: boring, preachy, or perverted works as far as the eye can see), then congratulating each other on their insight and daring, all while the audience headed for greener pastures—places where they wouldn’t be bored, insulted, or offended. It’s killed short stories almost entirely—people got sick of boring stories, perverted stories, and vitriolic garbage that insulted their very existence.

Diagnosis? Perverts, bores, and jagoffs drove the mainstream audience away. They’ve made Sci-Fi into a literary ghetto, and very nearly killed it entire. If it weren’t for Amazon… well that’s too chilling an eventuality to contemplate, even for me.

Fortunately, there’s a cure for this cancer of the soul, and Doctor Warpig is here to prescribe it. Come back for Part 3: Curing the Disease!

NOTE—This is the second of a series: Part One. Part Three.