The Gondwane books are set roughly 700 million years into the future.  The sun is a bit dimmer and the moon closer to earth and showing the cracks which will be it (and life on earth’s) undoing.  The continents kept moving and met on the other side, forming another supercontinent, and giving the books their name—Gondwane.  (Fortuitously, I was reading a bit about the summer solstice and learned that days are slowly getting longer as the earth’s rotation slows, but the days on Gondwane are not abnormally long.)  The laws of physics have subtly changed, and magic is as common as science, but each is more likely to appear as an inscrutable artifact.

The hero of Carter’s epic is no mere man.  Ganelon is found stumbling naked through a blue rain beside crystal mountains.  A wizard later determines he is a non-human construct.  For all intents and purposes a superman created by the Time Gods to face some potential disaster they foresaw millions of years after his demise (he was evidently hatched from stasis early and will miss his purpose, but no one gives much 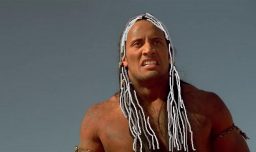 thought to this).  He is superhuman in every way.  He towers head and shoulders over mortal men.  He can outrun a horse in a sprint or a marathon.  Or he could, if horses weren’t extinct.  He has superhuman strength and stamina.  His skin is tougher than most armor, and he heals fast enough to practically have a healing factor.  Oh, and his hair is silver.  Not silver like your debonair uncle’s hair silver, silver like your avaricious aunt’s silver silver.  So basically he looks like this.

Jeffro wrote a Retrospective post on book 1, The Warrior of World’s End, and Morgan has a bit to say about the Gondwane books in his post on the Lin Carter style.

Each book features the adventures of Ganelon Silverman with an assorted band of fellow adventures.  In the first two books it is mostly the Illusionist, a female knight (knightrix), and a sapient, bronze bird (KITT, if KITT were an auntish Cessna).  In the third and fourth book, it is another, immortal wizard, a tigerman, and a gynosphinx (which is totally a real thing, and not just something Carter made up because it was the 70s and he was writing a sword-and-sorcery novel).

Sword and sorcery, in my opinion, doesn’t lend itself to the epic form.  This is no Wheel of Time, though.  The books could easily enough be read as standalones, and many (most?) of the adventures along the way are mostly unrelated to the rest.  Ganelon does move in a linear, if Calvin-esque, fashion across the continent of Gondwane.  Of course Gondwane is sixty million square miles, so we just see a small part of the continent, even with regular access to air travel, be it by talking plane, flying kayak, or well endowed lady sphinx.  The part of Gondwane they start in is called Northern YamaYamaLand.  I only say this as evidence that the demon weed wasn’t any weaker in the 1970s. 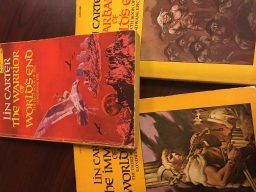 Carter’s prose is barely passable.  His naming conventions I like.  And “thews” are like “eldritch,” it just comes with the territory of this brand of imitation.  More annoying is the unidentified narrator, who can’t decide whether he is writing today or at some even later junction.  Footnotes are bad enough in nonfiction.  You are not David Foster Wallace.  Do not thrust footnotes upon us in your fiction (I would tell Wallace the same, but, well).  But to be fair, the prose stays out of the way and the slim novels are easy reads.

The obvious comparison from the world description is with Jack Vance’s Dying Earth.  Carter isn’t a quarter the stylist Vance is, but his dying world is fun.  If you’re one of those who complains that Vance is too dour—you know who you are—you may want to pick these books up.  Ganelon and his co-adventurers are unabashed white hats.  The bad guys are usually pretty easy to pick out, and a strange new character or city is as likely to be benevolent as malevolent.  Like de Camp’s The Tritonian Ring, the entire thing is written with a wry sense of humor.

The first two books are not only enormously fun but enormously inventive.  Perhaps a better writer could have done more with it, but Carter shows how much a crazy far future setting has to offer sword and sorcery.  The ideas per page ratio is extraordinarily high.  There are blue rains and crystal mountains and non-humans as wide as they are tall and illusionists who perpetually hide their faces behind blue mist and red-skinned enchantresses and automatons and flying islands and flying castles and moving cities and plant woman and vacuum bubbles and on and one.  The third book, unfortunately, is a major stumble.  Effectively everything, including new characters, is a reiteration of something from earlier in the series or is repeated within the book.  Book four (I’m about halfway through), doesn’t return the inventiveness of the first two books, but may have the strongest plot of the four.  Ganelon gives himself up to the Ximchak barbarians at the end of book three to save his friends.  He is successful in that, but his honor will not allow him to escape.  Instead he rises within the ranks of the horde.  It’s a fascinating story, period, and one well served by seeming stranger in comparison with modern norms.

Speaking of the Ximchak barbarians, Carter sometimes gets a bit too cute.  The Ximchak barbarians emphasize their red eyes by painting green circles around them, and wear antlers on their helmets (ho ho ho, Lin, ho ho ho).  The humor seemed a bit fresher in the first couple books (I wouldn’t recommend blasting through several of these in a week…better to give them a chance to breathe, advice I also ignore for wine).  Carter gets almost satirical at times.  In one mad city, our heroes are arrested and stand accused of “nocturnal sobriety, continence, pacifism and public decency.”  I once was arrested for the very same in New Orleans. 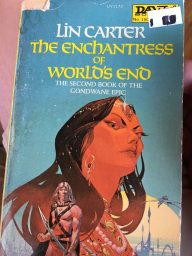 The Gondwane Epic does sort of exemplify the old school approach where there is no barrier between science fiction and fantasy.  A hard science pedant will hate it.  Carter casually hand-waves away objections.  Sure, something may be “[s]cientifically impossible, according to the present state of knowledge, of course.  But remember: in seven hundred million years the Laws of Nature have undergone change and alteration.”

I’m picking up Robert E. Howard’s Conan stories next.  It’s interesting that Carter flips Howard’s well known views of civilization on their head.  In the Gondwane Epic it is civilization that is prized.  There is an underlying sense that civilization, and humanity, will be pulled under by non-human and barbarian hordes.  Ganelon is a bit of a naïf, but he isn’t barbaric.  Indeed, as extraordinarily good as he is at separating foes from their lives as he is, he is very self-conscious of talking about it, or even it being pointed out.

The Gondwane Epic is also notable for featuring Michael Whelan’s first US cover, gracing The Enchantress of World’s End.

H.P. is an academic, attorney, and “author” (well, blogger) who will read and write about anything interesting he finds in the used bookstore wherever he happens to be at the moment. He can be found on Twitter @tuesdayreviews and at Every Day Should Be Tuesday.