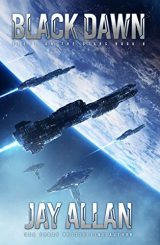 Many military science fiction writers have been vying to become the next John Ringo; Jay Allan instead sets his sights on David Weber and David Drake. In broad strokes, Tyler Barron’s careers share much with Honor Harrington’s, where a brilliant ship-to-ship action heralds the meteoric rise of an officer’s career in a meat grinder of a war, only to watch as a more insidious foe based on genetic slavery shatter the hard-won peace. But where Weber follows in the wake of C. S. Forester, Allan instead draws on the recent Battlestar Galactica for inspiration. Fighter pilots and repair crews decide battles, not the huge salvos of the Manticore Missile Massacre. This change in approach makes space combat fresh again and personalizes the stakes. Fortunately for such an ensemble approach, Barron is a firm leader who does not overshadow the rest of the characters, a novelty not seen in many fleet mil-sf books. Keep an eye out for upcoming Blood on the Stars books; the best from Jay Allan is yet to come. 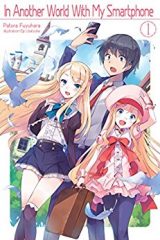 In Another World with My Smartphone, by Patora Fuyuhara, may just be the classic example of today’s popular blue slime (MMO-inspired) isekai fantasies. As in many light novels, the main character, Touya, dies before his time thanks to an error in heavenly bookkeeping. As a celestial apology, he is given a second chance at life in an European-influenced fantasy world, where, aided by new powers, he earns a living as an adventurer for a local guild. Along the way, he rounds out his party with a team of pretty and available young women. Yes, this plot has been done time and again, but the blueprint here is as true to the tropes as I’ve ever read.

Unfortunately, the trappings of the isekai genre start to choke out the fun of this brisk read. Gone are the focused plots of earlier isekai tales such as Vision of Escaflowne, Magic Knight Rayearth, and Fushigi Yuugi; instead Smartphone is a collection of open-ended slice-of-life chapters, where exploring the consequences of a new complication provides the drama instead of conflict. Its an approach that lends itself to episodic writing. Unfortunately, it also encourages sprawl, cast bloat, and an obsession with new characters at the expense of Touya’s stalwart companions. And that’s before the tried and tired tropes of waifus, middle-school fascinations, gothic lolita frills, and unfortunate accidents clog the pages. Those familiar with the hijinks of most anime high school comedies know where Smartphone is heading and will likely enjoy the story. At least Touya is neither an unrepentant psychopath or a creepy loser like way too many isekai protagonists, which makes his adventures an excellent (and bearable) introduction to isekai. 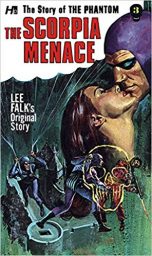 The Phantom returns in The Scorpia Menace. With an ocean between Skull Island and Diana Palmer, The Phantom wonders how he can ask the woman he loves to give up the luxury of high society for a home in the jungle. Meanwhile, Diana is eager to learn more about her Phantom. While studying for a history class at her university, she learns of the Scorpia, an ancient band of pirates that served as nemesis time and again to the unbroken father and son line of the 21 Phantoms. Her research indicates that the Scorpia still lurk in the criminal underworld. When the socialite explorer announces this in an interview, she attracts the attention and the kidnappers of the Scorpia. Now The Phantom must ride forth to rescue his beloved and put an end to the Scorpia menace.

Here Lee Falk tries to squeeze a three-hundred page story idea into a book only half as large. The scenes featuring Diana are fleshed out to the point where this is her book, not The Phantom’s. Kit Walker, unfortunately, gets shorted just as he’s showing some character, and The Phantom’s search for Scorpia and Diana is truncated–almost too easy for a battle of nemeses. The Phantom is supposed to be as much of an elemental force of vengeance as The Shadow, but that ominous charisma that all dark knights possess did not make the leap from comics to prose alongside The Phantom. The stakes for the Phantom certainly are present, but with a little more space, so could the tension. What is present is a rare look at what it takes to be a woman who could woo a pulp hero—brains, bravery, faith, and some hard-won common sense.