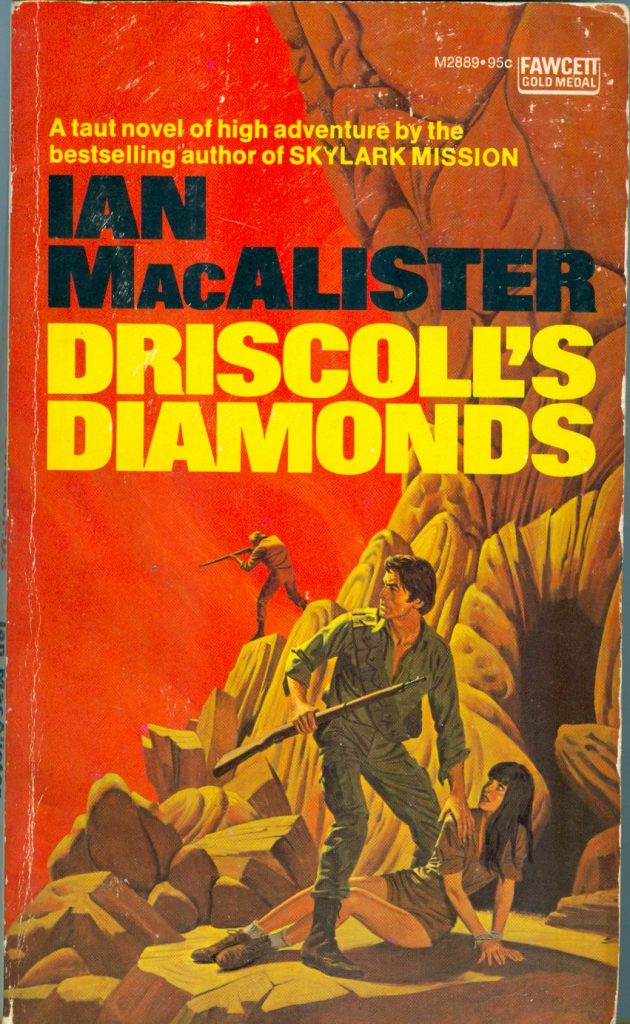 I have looked at three of four novel by Marvin Albert writing as “Ian MacAlister:” Skylark Mission, Strike Force 7, and Valley of the Assassins. I had some luck at the end of summer finding the last, Driscoll’s Diamonds. I have been enthusiastic about Albert’s novels. Some consider Driscoll’s Diamonds the best of the lot. This was the second novel as Ian MacAlister. Gold Medal published the novel in November 1973.

A man is found on the south coast of the Sinai Peninsula, more dead than alive. An Israeli patrol finds him, where he is taken to a field hospital and nursed back from death. The man is John Driscoll, former U.S. Army, a free-lance mercenary the past part of a decade. The Mossad knows him from training native troops in Uganda and Ethiopia.

Months later, Driscoll shacks up with an Israeli nurse from the hospital he recuperated. He notices men on his trail. From there, the story picks up and never lets go.

Driscoll had a stash of diamonds from an ambush job in Africa. He was part of a crew on the losing side. They decide to make some money bushwhacking a covert diamond smuggling operation. The leader of the crew takes a bullet to the gut and Driscoll absconds with the diamonds. The plane he is in crashes in the Red Sea where he ends up in the Sinai.

A failed ambush on Driscoll in the Dead Sea region reveals Royan, the supposedly dead merc leader. His men have taken Shana, the Israeli nurse hostage. Driscoll must help get back the diamonds.

Royan’s crew travels to Saudi Arabia where they hire a smuggler and his boat to retrieve the diamonds. A Sudanese patrol boat apprehends the smugglers and they escape to the Sudanese coast. What follows is a whirlwind of action as they battle native marauders and travel to where they can still get the diamonds. All this time, Driscoll plays members of Royan’s crew off each other to whittle down their numbers.

There is a very satisfying climax of diving for diamonds while fighting the marauders. That is it for the Ian McAlister novels. The three novels with contemporary settings were A+ examples of how to write an action adventure novel.

Marvin Albert wrote some crime and western novels. I have read two of the westerns so far. Stay tuned.