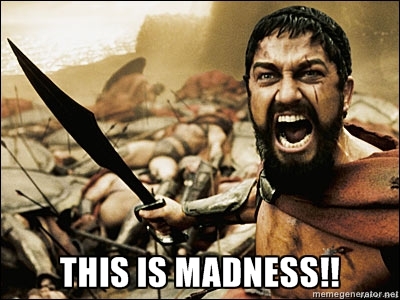 So Daddy Warpig is busy attempting to shake the pillars of heaven. But come on, guys. Let’s be honest here. Lots of comments are coming through disagreeing, but Daddy Warpig is still talking to a mostly friendly audience. The Castalia Blog is the heart of the pulp revolution; even as many people object, more agree. This is because the environment is already receptive to those ideas.

Similarly, if I say “The pulp works are superior to later works of science fiction and fantasy!” this is a politically incorrect opinion among a large mixed group of sci-fi fans; it is the prevailing wisdom of the Castalia blog at this point.

So I’m going to challenge you guys. I’m going to say something REALLY politically incorrect. Something that will cause an uproar – that will SHAKE THE PILLARS OF HEAVEN, perhaps!

Pulp fiction does not exist.

Or, more accurately, if pulp fiction exists, then it must be defined – which by definition makes it a genre. Otherwise, it is pointless to talk about it existing in any meaningful way.

Here’s what I mean:

What is a genre, really? Let’s define it:

A category of artistic composition, as in music or literature, characterized by similarities in form, style, or subject matter.

So the big question is this: Why do we want to bring pulp back?

“Well, we just want to bring back that era where there really weren’t any genres and people write what they want!”

Er, sorry, that can’t be it. You certainly don’t want people to write hard SF; hard SF is disqualified from pulp. So is pure Harry Potter style fantasy. Superheroes certainly aren’t pulp. So clearly pulp is a thing separate from “That era where you write what you want”.

H.P. Lovecraft was a nihilistic writer who wrote about average people who went insane when they looked at monsters. But he’s pulp, right?

Wrong, since there are rules for pulp.

We have Misha Burnett’s:

The Five Pillars Of Pulp Revival

These having been said, this is what I see as the signature characteristics of Pulp Revival.
Action: The focus of the storytelling is on what happens. We know who people are by what they do. This does not mean that every scene has to involve a knife fight on the top of a speeding train. Ordinary every day actions can also inform—Raymond Chandler could describe a couple’s relationship by showing us the man lighting the woman’s cigarette. We don’t want the writer to tells us that a scientist is an unconventional genius, we want to see him tearing a rival’s paper to shreds and throwing the pieces out the window when asked to critique it.
Impact: These actions have consequences. While a character’s actions do inform us of that character’s personality, significant actions should never be only character studies. They have lasting real world consequences. You don’t go into a pulp story with an expectation of a happy ending. Pulp heroes are fallible heroes, and when they fail, bad things happen. Neither, though, is worse coming to worst a forgone conclusion. Up until the very end a pulp character has the power to change his or her fate. They can always do something.
Moral Peril: Consequences are more than just material.

Guess what? When you do that, you’ve just created, by definition, a genre.

You’re not bringing back the pulps as they were.

You are supporting a new genre.

That’s true. What does Jeffro want?

No real distinction between sci-fi and fantasy – those genres should blend more. Into a new genre…pulp.

And this is what we’ve been objecting to all along, really. I don’t have a problem with the pulp revolution. Josh doesn’t. Karl doesn’t. John C. Wright doesn’t.

But what you’re doing here? You’re pushing your own preferred subgenre. There’s nothing wrong with that. I, too want to see more pulp fiction come back.

But that is what you’re doing. So let’s not pretend that this is some sort of new “write what you want” movement. That’s not – and never was – what the pulp revolution was.

And a good thing too, because otherwise, talking about pulp fiction as a thing, and bringing back more of it, is literally useless. It needs to be defined as a thing – a genre – or to talk about pulp is to talk about something so vague as to essentially be nothing at all.

No. Pulp is a genre.

And that’s A-okay with me.